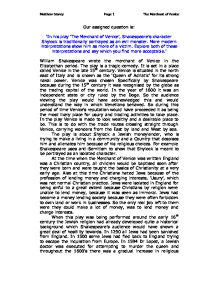 'In his play 'The Merchant of Venice', Shakespeare's character Shylock is traditionally portrayed as an evil monster. More modern interpretations show him as more of a victim. Explore both of these interpretations and say which you find more acceptable.'

Our assigned question is: 'In his play 'The Merchant of Venice', Shakespeare's character Shylock is traditionally portrayed as an evil monster. More modern interpretations show him as more of a victim. Explore both of these interpretations and say which you find more acceptable.' William Shakespeare wrote the merchant of Venice in the Elizabethan period. The play is a tragic-comedy. It is set in a place called Venice in the late 15th century. Venice is situated in the north east of Italy and is known as the 'Queen of Adriatic' for its strong naval power. Venice was chosen Specifically by Shakespeare because during the 15th century it was recognised by the globe as the trading capital of the world. In the year of 1600 it was an independent state or city ruled by the Doge. So the audience viewing the play would have acknowledged this and would understand the way in which Venetians behaved. So during this period of time Venice's reputation would have proceeded it as being the most likely place for usury and trading activities to take place. In the play Venice is made to look wealthy and a desirable place to be. This is to do with the trade routes crossing straight through Venice, carrying wonders from the East by land and West by sea. The play is about Shylock a Jewish moneylender, who is trying to make a living in a community and a Country that despises him and alienates him because of his religious choices. ...read more.

Shylock repeatedly labels Lancelot as, 'The Prodigal Christian.' In general expressing his hatred of Lancelot and Christianity. So after the bond has been made with Antonio, Shylock is left alone with no family. He suddenly turns into a villain when he shouts showing his emotions : "My daughter! O my ducats! O my daughter! Fled with a Christian! O my Christian ducats" This again shows his hatred for Christians and that his money has more value than his own daughter's life. In Act 3, Scene 1 Tubal tells Shylock that his daughter, Jessica, 'In Genoa, one night four score ducats!' Shylock reacts not out of concern for his daughter's whereabouts, and health but shows a great amount of evil by shouting, 'I shall never see my gold again.' Jessica overhears Shylock swearing that: "He would rather have Antonio's flesh than 20 times the sum." This tells us that Shylock has not had second thoughts about his evil plan and is insistent on receiving Antonio's flesh. Stating the point that he is persistent on getting his bond, once again only an evil individual would intend to carry out such an act. Antonio becomes bankrupt; all his wealth, which was invested in his ships, has been lost because the ships have sunk out at sea. When shylock hears the news he demands his rightful pound of flesh under the Venetian law, 'I'll have my bond.' ...read more.

It is ironic that Portia passes judgement on Shylock, and criticises him for not showing Antonio mercy, yet she acts with the same lack of mercy towards Bassanio regarding the ring as Shylock did to Antonio. Shylock is dishonoured and disgraced in the court scene, his only friend Tubal (also a Jew) walked out on him, as he ruthlessly cut into Antonio's flesh. Everything and every one has left Shylock, he is destroyed by his own doings, and he is even isolated by his fellow Jews. Shylock can be seen as both comic and tragic because of his quick, inconsiderate responses. In conclusion, I believe that Shakespeare deliberately isolates Shylock, which then makes the play more effective. Putting all Christians in the play wouldn't t give the play such a strong plot, as it has with a minority of people who follow different religions. In the play the only Jewish characters are Shylock and his employee Tubal. They are seen as outcasts for their religious beliefs. There would be no verbally abusive things said to both the Christians and the Jew and no remarks or stage directions used to show Shylock as the outsider, because the Christians would have treated him like one of their own. Shylock shows some of the characteristics of a villain, but these are simply products of his victimisation; Shylock is a victim of the self-absorbed, racist community that Venice had become. His anger and frustration that lead to him making poor judgements are products of having to endure the torment of this cruel, harsh and discriminative environment. Matthew Storey Page 1 The Merchant of Venice ...read more.