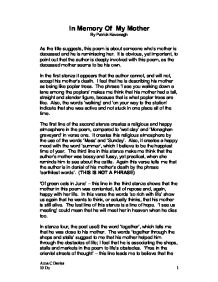 In Memory Of My Mother.

In Memory Of My Mother By Patrick Kavanagh As the title suggests, this poem is about someone who's mother is deceased and he is reminiscing her. It is obvious, yet important, to point out that the author is deeply involved with this poem, as the deceased mother seems to be his own. In the first stanza it appears that the author cannot, and will not, accept his mother's death. I feel that he is describing his mother as being like poplar trees. The phrase 'I see you walking down a lane among the poplars' makes me think that his mother had a tall, straight and slender figure, because that is what poplar trees are like. ...read more.

'Of green oats in June' - this line in the third stanza shows that the mother in this poem was contented, full of repose and, again, happy with her life. In this verse the words 'so rich with life' show us again that he wants to think, or actually thinks, that his mother is still alive. The last line of this stanza is a line of hope. 'I see us meeting' could mean that he will meet her in heaven when he dies too. In stanza four, the poet useS the word 'together', which tells me that he was close to his mother. The words 'together through the shops and stalls' suggest to me that his mother helped him through the obstacles of life; I feel that he is associating the shops, stalls and markets in the poem to life's obstacles. ...read more.

The poet repeats the image of his mother 'lying in the wet clay' in the final stanza. This is because he knows that she is 'lying in the wet clay' but he doesn't want to think of her in that way. The memories that the poet has of his mother are all very pleasant, and the poem shows that they had a loving and caring relationship. I thought this poem 'In Memory of My Mother' had an overall happy mood'; and even though I did not know his mother, I think that she would be proud of her son for writing such a loving poem about her. Anna C Davies 10 Du 1 ...read more.

This concluding paragraph is not suitable for an analytical essay as it is irrelevant and too personal.