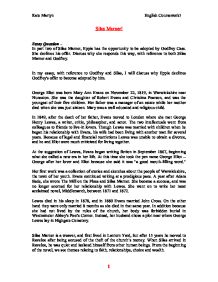 In part two of Silas Marner, Eppie has the opportunity to be adopted by Godfrey Cass. She declines his offer. Discuss why she responds this way, with reference to both Silas Marner and Godfrey.

Silas Marner! Essay Question - In part two of Silas Marner, Eppie has the opportunity to be adopted by Godfrey Cass. She declines his offer. Discuss why she responds this way, with reference to both Silas Marner and Godfrey. In my essay, with reference to Godfrey and Silas, I will discuss why Eppie declines Godfrey's offer to become adopted by him. George Eliot was born Mary Ann Evans on November 22, 1819, in Warwickshire near Nuneaton. She was the daughter of Robert Evans and Christina Pearson, and was the youngest of their five children. Her father was a manager of an estate while her mother died when she was just sixteen. Mary was a well educated and religious child. In 1849, after the death of her father, Evans moved to London where she met George Henry Lewes, a writer, critic, philosopher, and actor. The two intellectuals went from colleagues to friends to live-in lovers. Though Lewes was married with children when he began his relationship with Evans, his wife had been living with another man for several years. Because of legal and financial restrictions Lewes was unable to obtain a divorce, and he and Eliot were much criticized for living together. At the suggestion of Lewes, Evans began writing fiction in September 1867, beginning what she called a new era in her life. At this time she took the pen name George Eliot -- George after her lover and Eliot because she said it was "a good mouth-filling word." Her first work was a collection of stories and sketches about the people of Warwickshire, the town of her youth. Evans continued writing at a prodigious pace. A year after Adam Bede, she wrote The Mill on the Floss and Silas Marner. She became a success, and was no longer scorned for her relationship with Lewes. She went on to write her most acclaimed novel, Middlemarch, between 1871 and 1872. Lewes died in his sleep in 1878, and in 1880 Evans married John Cross. ...read more.

When Silas returns he sees what he believes to be his gold, which 'seemed to glow and get larger beneath his agitated gaze.' (Chapter 12 pg 96) Surprisingly, 'instead of hard coin, his fingers encountered soft curls.' This turned out to be Eppie, lying by the fire. Immediately Silas takes Eppie to the Red House, searching for a doctor to help her mother, who is lying in the snow outside his house. When Godfrey Cass hears about the disturbance he tells Silas to take Eppie to the parish in the morning. Silas responds saying, 'No-No can't part with it, I can't let it go...Its come to me - I've right too keep it.' (Chapter 13 pg 99) This is the point where Silas believes she is a 'gift from god', to replace his gold which has been stolen- and chooses to look after her. The arrival of Eppie, has re-awakened some of Silas's faith, and he is open to the return of religion into his life. Silas has to change his lifestyle now Eppie has arrived, because he now has the responsibility of looking after and caring for a child. Also he is back in contact with the villagers as he starts to take Eppie to church. The villagers are now, 'softening' away from 'dislike in a rather contemptuous', way towards 'a more active sympathy for him.' (Chapter 14 pg 104) Godfrey Cass is the son of Squire Cass and the older brother of Dunstan Cass. From the perspective of the villagers we are introduced to Godfrey as a 'fine open faced, good natured young man.' (Chapter 3 pg 20) We also learn how he is starting to act more and more like his younger brother, Dunstan's, 'a spiteful, jeering fellow, who seemed to enjoy his drink.' (Pg 20) It was clear he had a few problems. The readers are also told that that Godfrey is in fact, secretly married to Molly Farren, with whom he was a child. ...read more.

The main opportunity was to claim Eppie, but at first, he thought that his life in the future would be better with Nancy if Eppie was remained unclaimed. Unfortunately Nancy is unable to have children and produce an heir for him. This is when Godfrey realizes, as her biological father, that she could be that upcoming heir he desperately needs, to prevent his name leaving the Red House as a 'Squire'. Godfrey puts forward an opportunity to Eppie, for her to move in with himself and Nancy, as, 'he would provide her with a better future.' Eppie's response isn't as he expected - she says no! The reason is that Eppie doesn't want to lead the life of a lady, and have to change the social group of which she is part. Eppie wants to remain with Silas and look after him until the end, just like he has cared for her. This choice of Eppie's, has rewarded those who nurtured her - in this case, Silas. Overall, George Eliot wrote this book as a very moralistic novel. Silas deserved to be loved by Eppie as he provided her with a loving home, family and religion; all out of the goodness of his heart. So when Eppie decides she wants to stay with him, it rewards him and returns his gratitude. On the other hand, all of Godfrey's choices were self - serving. In the beginning he had an opportunity to claim Eppie from Silas, but failed to, supposing that his life will be improved with Nancy, without the difficulties of Eppie. Later on in the novel, he recognizes he made the wrong decision, as Nancy is unable to produce any heirs to take his place. Once more his actions are convenient for him because, he now realizes that Eppie could take that that position. In spite of this when Eppie declines his offer, he deserves it, as in the past he has been a selfish coward. Therefore it proves that life can change, because of the path you choose to lead!! ?? ?? ?? ?? Kate Martyn English Coursework! 1 ...read more.