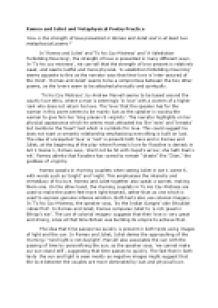 In Romeo and Juliet and To his Coy Mistress and A Valediction Forbidding Mourning, the strength of love is presented in many different ways.

﻿Romeo and Juliet and Metaphysical Poetry Practice ?How is the strength of love presented in Romeo and Juliet and in at least two metaphysical poems?? In ?Romeo and Juliet? and ?To his Coy Mistress? and ?A Valediction Forbidding Mourning?, the strength of love is presented in many different ways. In ?To his coy mistress?, we can tell that the strength of love present is relatively weak, and seems lustful and more physical. ?A valediction forbidding mourning? seems opposite to this as the narrator says that their love is ?inter-assured of the mind?. ?Romeo and Juliet? seems to be a compromise between the two other poems, as the lovers seem to be attached physically and spiritually. ?To his Coy Mistress?, by Andrew Marvell seems to be based around the courtly love ethic, where a man is seemingly ?in love? with a women of a higher rank who does not return his love. ...read more.

Romeo speaks in rhyming couplets when seeing Juliet in Act 1 scene 5, with words such as ?bright? and ?night. This emphasises the intensity and immediacy of his love. Romeo and Juliet together also speak a sonnet, making them one. On the other hand, the rhyming couplets in To His Coy Mistress are used to make the poem feel more light hearted, rather than as one which is used to express genuine intense emotion. Both texts also use colonial imagery. In ?To his Coy Mistress, the speaker says, ?by the Indian Ganges? side Shouldst rubies find?. In Romeo and Juliet, Romeo compares Juliet to ?a rich jewel in Ethiop?s ear?. The use of colonial imagery suggests that their love is very great and strong, since at that time Britain was building its empire to achieve that. ...read more.

The speaker describes them ?as stiff twin compasses are two?. This poem talks of a mature love, as there is no uncertainty; ?Thy firmness makes my circle just and makes me end where I begun. Their parting is also very tranquil and peaceful, with ?no tea-floods, nor sigh-tempests move?. This is unlike the reaction of Romeo in Act 3 Scene 3 where Romeo learns of his sentence to be banished from Verona. He compares the sentence worse than death; ?Ha, banishment? Be merciful, say ?death??. During Romeo?s soliloquy in that scene, he repeatedly uses theword ?banished?. This makes him sound more childish and immature- the word ?banished? is spat out as a plosive ?b?; ?But ?banished? to kill me? ?Banished??. This highlights the desperation he feels about the upcoming separation. Compared to ?A Valediction Forbidding Mourning?, Romeo?s reaction seems childish, as he cannot stand the physical separation. This perhaps suggests that the strength of love between Romeo and Juliet is not as strong as the love shown in ?A Valediction Forbidding Mourning?. ...read more.