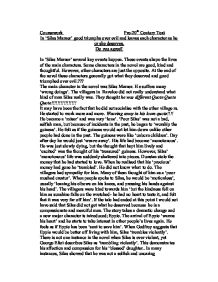 In 'Silas Marner' good triumphs over evil and leaves each character as he or she deserves. Do you agree?

Coursework Pre-20th Century Text In 'Silas Marner' good triumphs over evil and leaves each character as he or she deserves. Do you agree? In 'Silas Marner' several key events happen. These events shape the lives of the main characters. Some characters in the novel are good, kind and thoughtful. However, other characters are just the opposite. At the end of the novel these characters generally got what they deserved and good triumphed over evil.??? The main character in the novel was Silas Marner. He suffers many 'wrong doings'. The villagers in Raveloe did not really understand what kind of man Silas really was. They thought he was different Quote Quote Quote!!!!!!!!!!!!!!!! It may have been the fact that he did not socialise with the other villagers. He started to work more and more. Weaving away in his loom quote!!!! He became a 'miser' and was very 'lone'. 'Poor Silas' was not a bad, selfish man, but because of incidents in the past, he began to 'worship the guineas'. He felt as if the guineas would not let him down unlike other people had done in the past. ...read more.

I feel that Silas gets what he deserves in the end; happiness and love, which are reciprocated by his daughter. Godfrey is not as courteous as Silas. Godfrey was never satisfied with what he had. He lived an 'idle', selfish life. Godfrey exhibits what he is like when his first wife dies. He was too worried about people knowing that his wife was a 'poor villager', that he would rather she was dead than alive. This was an 'evil terror' from an evil man. Although Godfrey finishes the story with a good, kind wife and a large estate, he does not have a family around him. He wanted a child, but after trying for a long time he realises that he cannot have a child. He then tries to make Eppie live with him, but nobody could persuade her to leave Silas. He also lacks something else; satisfaction. He will never be truly contented. I feel that Godfrey leaves the story as he deserves; unsatisfied. I felt that some of the actions of Godfrey were quite evil. I felt that good triumphed over evil, especially when Godfrey's evil ways where overcome by Silas's and Eppie's love for each other. ...read more.

Dunstan is also a 'thief'. Inadvertently this helps Silas to become a proper person again. Dunstan was a rude, unliked thief, an evil character. Later in the novel, Dunstan is found dead with Silas's money. However, when somebody dies, normally they are grieved for, but in this case nobody did. Nobody was sorry that he had gone forever. I believe that the fact nobody grieved for Dunstan was a punishment in its self. Dunstan dies at an early age and yet again good triumphed over evil. I agree with the statement 'In 'Silas Marner' good triumphs over evil and leaves each character as he or she deserves'. As the reader you feel comforted by the fact that Silas and Eppie, the good characters, leave the novel contented. The final lines of the tale are 'what a pretty home ours is! I think nobody could be happier than we are'. This reminds me of the old familiar fairy tale ending 'and everybody lived happily ever after'. The novel 'Silas Marner' is in some ways like a 'fairy tale'. The good people go through a rough patch and numerous bad things happen to them, yet in the end they come out on top. The good people, in the end, triumph over the evil people. I felt that everybody left the novel as they deserved. ...read more.