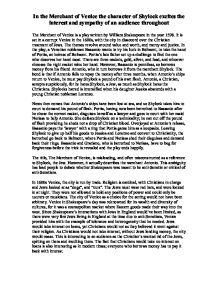 In the Merchant of Venice the character of Shylock excites the interest and sympathy of an audience throughout The Merchant of Venice is a play written by William Shakespeare in the year 1598. It is set in a corrupt Venice in the 1600s, with the city in disaccord over the Christian treatment of Jews. The themes revolve around value and worth, and mercy and justice. In the play, a Venetian noblemen Bassanio wants to try his luck in Belmont, to take the hand of Portia, an heiress of Belmont. Portia's late father set up a challenge to find the one who deserves her hand most. There are three caskets, gold, silver, and lead, and whoever chooses the right casket wins her hand. However, Bassanio is penniless, so borrows money from his friend Antonio, who in turn borrows it from the merchant Shylock. The bond is that if Antonio fails to repay the money after three months, when Antonio's ships return to Venice, he must pay Shylock a pound of his own flesh. Antonio, a Christian, accepts suspiciously, for he hates Shylock, a Jew, as much as Shylock hates the Christians. Shylocks hatred is intensified when his daughter Jessica absconds with a young Christian nobleman Lorenzo. ...read more.

However, Lancelot leaves without telling Shylock. Lancelot would rather run away to Bassanio, who is much poorer, than work for Shylock, who he thinks "is the very devil incarnate". The fact that Lancelot will leave Shylock for the reason that he is a Jew makes a modern audience feel sympathy. However, an Elizabethan audience would have jeered when Lancelot deserted Shylock. The law is a fundamental part of Venetian society. Shylock uses the law to exact his revenge on Antonio. Shylock hates Antonio for a number of reasons. He hates him for he is a Christian and his poor treatment of Jews. "I hate him for he is a Christian". He hates him for historical reasons. There has always been strife between the two religions, "I will feed fat the ancient grudge I bear him". Shylock also hates him because of how he lowers the interest rates on lending. "He lends out money gratis, and brings down the rate of usance here with us in Venice". His reasons for wanting to kill Antonio come across as very arbitrary and obscure. He compares his reason to kill Antonio with - "Some men there are love not a gaping pig / Some that are mad if they behold a cat." ...read more.

In modern times Shylock is conceived as an interesting character, empathetic, even - yet still a villain. Yet in Elizabethan times people would feel he deserved what he got, and is let off lightly as he would be a murderer. They would also have believed that enforcing Christianity on him would be an enforced benefit. In Elizabethan times Shylock would be likened to Barabas in the Jew of Malta, written in 1589. His villainy would be exaggerated, and he would be depicted as evil, deceptive, and avaricious. Elizabethan audiences would feel that the ending suits comedy formula. All the problems are resolved, so the fun can begin, Act 5. However, a modern audience would feel frustration at the dismissal of Shylock, it seems heartless. To all audiences, Shylock represents an interesting, in-depth character. He is the character in the play that manages most to excite the interest and sympathy of the audience. However, the audience does not at all times feel sympathy for him. While the treatment he receives makes the audience feel sorry for him, at some times he reacts in a way that would make some people feel resent against him. He criticizes Christian's while he has the same faults. They insult him, yet he feeds on this. While sympathy is felt, it is clear to all audiences that Shylock is the antagonist in this play. ...read more.