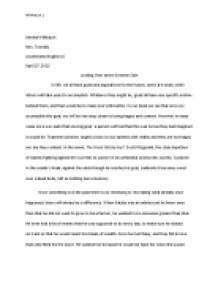 In the novel, The Great Gatsby by F. Scott Fitzgerald, the clear depiction of Gatsby fighting against the currents to survive in an unfamiliar aristocratic society, is placed in the readers head,

﻿Willhauck Amelia Willhauck Mrs. Trombly Accelerated English 10 April 27, 2012 Looking Over at the Greener Side In life, we all have goals and aspirations for the future; some are small, while others will take years to accomplish. Whatever they might be, goals all have one specific motive behind them, and that would be to make one?s life better. In our head we see that once we accomplish this goal, we will be one step closer to being happy and content. However in many cases once we reach that one big goal, `a person will feel that this was not as they had imagined it would be. That their pristine, angelic vision is now tainted with reality and they are not happy nor are they content. In the novel, The Great Gatsby by F. Scott Fitzgerald, the clear depiction of Gatsby fighting against the currents to survive in an unfamiliar aristocratic society, is placed in the reader?s head, against the odds though he reaches his goal, suddenly it becomes a veil over a dead body, left as nothing but a memory. ...read more.

Gatsby?s great mistake was assuming that once Daisy saw him for the first time in five years that she would drop everything, leave her husband, Tom Buchannan, and daughter to start a new life with him. Gatsby, now living in the East Egg, is now in control of enormous abundances of money, yet it is obvious to the reader even in the beginning of the book that he is not happy. The narrator of the story, Nick, first sees Gatsby at night reaching across the bay, shaking and trembling, towards a green light at the end of Daisy Buchannan?s dock. As the story goes on this light becomes a clear symbol of hope that they will once again be reunited. At first he tries to lure her over to his house by throwing extravagant parties, but of course this was doomed to fail, because old money doesn?t correspond with new money. New money was portrayed as gaudy and reckless, while old money had social class and elegance. ...read more.

So when Gatsby openly speaks to Tom about his love for Daisy, he is shocked that she does not stand up for herself and tell Tom that she feels the same. Even after this Gatsby takes the blame for the tragedy of Daisy running over a woman, and this leads to Gatsby?s murder when this woman?s husband seeks for revenge. The minuscule lines between money, greed, love, obsession and desire are all blurred in this novel. They turned a child?s fantasy of one day becoming a member of the upper class into a depressing wasteland. Gatsby?s goal was reached, but when he got there he never realized it. He was rich, had high social status and for a brief period of time he even had Daisy. Sometimes your wishes come to you in unexpected ways and what is imagined is different than reality. What stops a person from seeing that what they wanted is right in front of them, is the pressures of society to always climb higher, and to never stop pushing against the indefatigable current. ________________ ...read more.