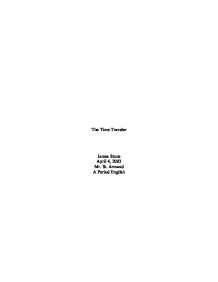 In the novel The Time Machine by H.G. Wells, there are numerous adventures that the main character, the Time Traveler, experiences in his quest for knowledge.

The Time Traveler James Stone April 4, 2003 Mr. St. Armand A Period English Outline 1. The ideas of the time traveler A. Fourth Dimension B. The idea of time travel C. His search for the modern utopia 2. His journey into the future A. When he sees all the changes going around him B. The Eloi C. The Morlocks 3. What he believes has happened to the world A. Four hypothesis of the genius B. Battle between good and evil 4. The future after the Eloi and the Morlocks A. The giant crabs B. The black blob C. His return back to his time James Stone English A period Mr. St Armand Stone 1 In the novel The Time Machine by H.G. Wells, there are numerous adventures that the main character, the Time Traveler, experiences in his quest for knowledge. From his ideas of an fourth dimension, to is search for a modern utopia, and his ever relenting question of what the future is going to be like. In the novel the Time Traveler tells his acquaintances about his idea of a fourth dimension and his time machine. He believes that there is a fourth dimension running next to all the other three. ...read more.

They are also nocturnal hunters and the Eloi are very afraid of them, the Time Traveler is however amazed by them. He believes that these Morlocks are indeed subterranean races, which are fast, strong and incredibly agile. During the novel the Tim Traveler comes across these creatures of this new world, which are the Eloi and the Morlocks. His first hypothesis is when he first encounters the Eloi he believes that they are the sole descendants of the modern human race. The reason he believes this is because of the fact that they look like modern day humans and they have all the signatures of a human being in a "pastoral community"(Huntington 4). From their eyes, nose, lips and hair they look very similar to the modern human of today. His second hypothesis is a sound one but flawed because of the fact that he does not know the nature of this new world. He after somewhat proving that indeed the Eloi were descendants of the human race is that he then considers the Eloi the lords of a class divided earth in which they hold the subterranean Morlocks in subjection. ...read more.

As he returns his guests are waiting him for dinner. He is very rude towards them and is very hungry and thirsty and refuses to tell them where he has been all this time. He then tells them that he needs to go clean up and then continues to tell them his tales. Afterwards everyone leaves and he gets on his machine and goes into the future and never again returns to his time. All in all the Time Traveler was a strong and very curious genius who in his search for truth came across agony, pain and also a sense of truth. He figured out his question and also proved everyone wrong who doubted him by traveling in his fourth dimension of time. Criticism 1. Wells, H.G The Time Machine Tom Doherty Associates, 1992 2. Beilharz, Peter. Labour's Utopias: Bolshevism, Fabianism, Social Democracy. London: Routledge, 1993 3. Huntington, John. The Logic of Fantasy: H.G. Wells and Science Fiction. New York: Columbia UP, 1982 4. Kumar, Krishan. Utopia and Anti-Utopia in Modern Times. London: Blackwell, 1991 5. McConnell, Frank. The Science Fiction of H.G. Wells. Oxford: Oxford UP, 1981. 6. Partington, John S. "The Death of the Static: H.G. Wells and the Kinetic Utopia". Utopian Studies 11.2 (2000): 96-111 ...read more.