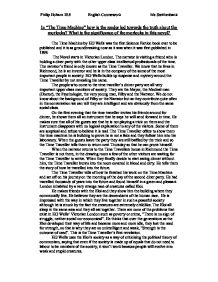 In &quot;The Time Machine&quot; how is the reader led towards the truth about the morlocks? What is the significance of the morlocks in this novel?

In "The Time Machine" how is the reader led towards the truth about the morlocks? What is the significance of the morlocks in this novel? The Time Machine by HG Wells was the first Science Fiction book ever to be published and it is as groundbreaking now as it was when it was first published in 1898. The Novel starts in Victorian London. The narrator is visiting a friend who is holding a diner party with the other upper class intellectual professionals of the time. The narrator's friend is only known as the Time Traveller. We know that he lives in Richmond, he is an inventor and he is in the company of the some of the most important people in society. HG Wells builds up suspense and mystery around the Time Traveller by not revealing his name. The people who come to the time traveller's dinner party are all very important upper class members of society. They are the Mayor, the Medical man (Doctor), the Psychologist, the very young man, Filby and the Narrator. We do not know about the background of Filby or the Narrator but as they contribute quite often in the conversation we can tell they are intelligent and are obviously from the same social class. ...read more.

However the longer the Time Traveller is in the future he realises that there is another race besides the Eloi. He notices that around the Eloi's settlement are lots of wells and he hears the puzzling sound of machinery from underground during the night. One morning he catches a glimpse of a like creature he describes as "A queer little ape figure" but it quickly disappears down one of the wells. He begins to understand that the wells lead down to the underground settlement of the strange white creatures, which seem to be mainly nocturnal. The underground creatures are called the Morlocks. He develops another theory in which the Morlocks are the labourers for the Eloi. He thinks about the way his own society in Victorian London has a huge gulf between the rich and the poor. He wonders how significantly the gap may have widened since then. He realised there are now two races of man, "The truth dawned on me: that man had not remained one species, but had differentiated into two distinct animals". He contemplated the way that the Morlocks have evolved and adapted to living underground, he believes that they have lived there for many generations, they have developed the features of nocturnal animals, such as large eyes. ...read more.

And now that brother was coming back - changed!" It is not long before the Time Traveller finalises his theories explaining the society. In his fourth he tells us why the Morlocks really are in charge of the society. The Eloi are "mere fatted cattle which the ant like Morlocks preserve and pray upon". He has seen that it is the Morlocks pray upon the Eloi and that is the reason that they are feared. HG Wells has used the relationship between Eloi and Morlocks to portray the way he feels his society is going wrong. Fortunately, in hindsight we are able to see that Victorian society did not go to the extreme of splitting the human race into two species. However, there is still a struggle in the world between workers and Capitalists. It would be very easy for HG Wells to argue that the process of dividing the human race is still in progress when there are so many people around the world living and working in conditions not dissimilar to that which transformed humans into Morlocks. Philip Holtam 10.8 English Coursework Ms Swithenbank ...read more.