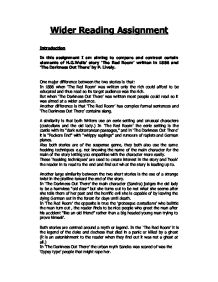 In this assignment I am aiming to compare and contrast certain elements of H.G.Wells' story 'The Red Room' written in 1886 and 'The Darkness Out There' by P. Lively.

These myths make the reader think that something related to the myths may happen. 'The Red Room' is a first person narrative because it only has one main character so it lets you understand his inner thoughts and feelings. 'The Darkness Out There' is a third person narrative; this is unusual because it is told from Sandra's point of view. The writers include both young and old people to show that you cannot always trust stereotypes and that people are not always what they seem to be at first. In the beginning of both stories the old characters are portrayed as opposites between the two stories, in 'The Red Room' the old people are at the beginning shown to be "grotesque custodians" but to be just trying to warn the young man away from 'The Red Room.' Similarly and Contrasting in 'The Darkness Out There' the old woman in it is depicted as a "kindly old woman" but ends being described as an evil "bitch" by the finish of the story. ...read more.

Normally we would say ledge out side of the door but in 'The Red Room' the word used is slab to make it sound old, heavy and to add to the atmosphere. Conclusion: The two stories have many similarities and differences in various areas, Both of the characters judge by appearance and rely on that judgement to make assumptions about peoples characters (Mrs Rutter: Kind simple stereotypical old person) but before the end of the stories they learn not to 'judge a book by its cover' The man from the red room learns that's the 'grotesque custodians' as they first appeared are nothing of the sort and they were actually trying to warn him away from the room. These assumptions made by the characters are used by the authors to show that we also judge people by their physical descriptions. The stories plotlines both take amazing twists towards the end although the twists are completely opposites, in 'the red room' the grotesque custodians become gentle people who show the man respect after the event. 'The Darkness Out There' changes from Mrs Rutter the kindly old lady into Mrs Rutter the evil 'bitch.' ...read more.