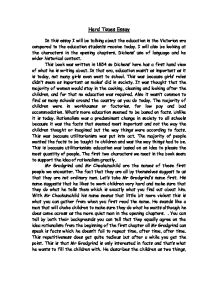 In this essay I will be talking about the education in the Victorian era compared to the education students receive today. I will also be looking at the characters in the opening chapters, Dickens' use of language and he wider historical context.

Hard Times Essay In this essay I will be talking about the education in the Victorian era compared to the education students receive today. I will also be looking at the characters in the opening chapters, Dickens' use of language and he wider historical context. This book was written in 1854 so Dickens' here has a first hand view of what he is writing about. In that era, education wasn't as important as it is today, not many girls even went to school. This was because girls' roles didn't seem as important as males' did in society. It was thought that the majority of women would stay in the cooking, cleaning and looking after the children, and for that no education was required. Also it wasn't common to find as many schools around the country as you do today. The majority of children were in workhouses or factories, for low pay and bad accommodation. What's more education seemed to be based on facts. Unlike it is today. Rationalism was a predominant change in society to all schools because it was the facts that seemed most important and not the way the children thought or imagined but the way things were according to facts. ...read more.

Sissy is referred to as a bad pupil and thought to be ignorant but very healthy; she has good colouring in her skin and the sun shone on her quite nicely form the window. The reason Sissy is a bad pupil because of the answer she gives Mr. Gradgrind. He asks her what a horse is and she doesn't now how to define a horse in his terms and becomes quite alarmed. Mr Gradgrind looks upon her and tells the class she, "that possesses no facts in reverence to one of their commonest of animals". He than asks another pupil in the class his name is Bitzer. This boy has a difference in appearance to Sissy. He has paler skin and the way the sun shone on him didn't bring out his best colour. His eyes are barely distinguishable the only thing that brings life about them is his eyelashes and on top of that he also gives the right answer to Gradgrind which seems to be scientific facts on what a horse really is. This would tell me that Bitzer doesn't get out much and most probably spends the majority of his time with his head in books researching the facts that Choakumchild and Gradgrind pump into him every day. ...read more.

The narration is very different to the text it is more descriptive than anything else. In such terms Mr Gradgrind always mentally introduced himself, whether to his private circle of acquaintance, or to the public in general. In such terms, no doubt, substituting the words 'boys and girls' for 'sir', Thomas Gradgrind now presented Thomas Gradgrind to the little pitchers before him, who were to be filled with facts This is certain piece of text is telling us about Mr Gradgrind and most of the narrative is the same. Describing, children, characters the setting and types of situation. The narrative gives a more in depth look at what is going on and tells us more about the characters through the ways the interact with others. In conclusion I think Dickens has expressed his view on how education was in a rationalistic society very strongly. It seems to be a very strict and fact orientated education system which is thought best for the children though they may find it quite confusing. There is no room for error, misinterpretation, or personal opinions. There is only room for facts which is what everything in life is about. And facts are what justify the way things are. Dickens strongly disagrees with this system with he shows through the first couple of chapters of the book. ...read more.