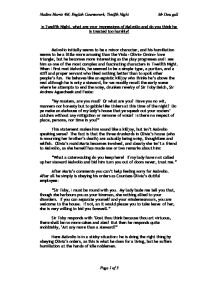 In Twelfth Night, what are your Impressions of Malvolio and do you think he is treated too harshly?

In Twelfth Night, what are your Impressions of Malvolio and do you think he is treated too harshly? Malvolio initially seems to be a minor character, and his humiliation seems to be a little more amusing than the Viola- Olivio- Orsino- love triangle, but he becomes more interesting as the play progresses and I see him as one of the most complex and fascinating characters in Twelfth Night. When I first met Malvolio, he seemed to be a simple type, a puritan, and a stiff and proper servant who liked nothing better than to spoil other people's fun. He behaves like an egoistic killjoy who thinks he's above the rest although he is only a steward, for we readily recall the early scene where he attempts to end the noisy, drunken revelry of Sir Toby Belch, Sir Andrew Aguecheek and Feste: "My masters, are you mad? Or what are you? Have you no wit, manners nor honesty but to gabble like tinkers at this time of the night? ...read more.

The reason why I refer to Malvolio as a puritan is because in the days when Twelfth Night was first written, Puritans were a strict religious group: they did not like merrymaking in any form; they disliked drinking, they despised theatre and entertainment, they were often associated with merchants and were sometimes thought to be self-seeking, they condemned anything bawdy, they disliked all sports and they dressed very plainly. Similarly, Malvolio dresses very plainly, and does everything with perfection. He is very strict with those around him, especially with those like Sir Toby Belch (even though Malvolio has no authority over Belch, as we have seen above). The situation in which Malvolio carries out the errand of telling Sir Toby and his associates to stop their immature behaviour provokes Maria, Toby and Andrew who hatch the plot in which Malvolio is duped by the forged love letter "from Olivia" saying that she loves him. This very action changes Malvolio; he enjoys the delusion of being head of the house, a kind of social promotion, which leads him to believe he can finally get rid of Toby and boss the household servants about. ...read more.

He is not only the errand boy and a general manager but also a "household policeman" whose duty is to keep the house in order and fulfil his Countess's wishes. If he imagines himself to be loved by Olivia, it is totally harmless and he is not the only one to feel this way; Orsino and Sir Andrew feel exactly the same way as they both have similar delusions. Anyone who doesn't believe that Malvolio was treated far too harshly is evil. To watch a man break down in front of you is quite sad. My opinion is clearly recognised in the text. As "Sir Topas" baits his victim, Sir Toby says: "I would we were well rid of this knavery. If he may be conveniently delivered, I would he were, for I am now so far in offence with my niece that I cannot pursue with any safety sport the upshot." But Toby is too late. Malvolio has finally cracked and leaves the play with the final words: "I'll be revenged on the whole pack of you!" Malvolio is a totally broken man. Nadine Harris 4M; English Coursework; Twelfth Night Mr Dougall Page 1 of 3 ...read more.