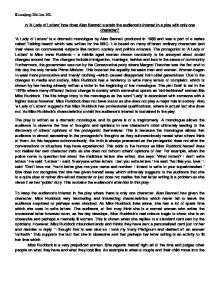 In A Lady of Letters how does Alan Bennett sustain the audiences interest in a play with only one character?

In 'A Lady of Letters' how does Alan Bennett sustain the audience's interest in a play with only one character? 'A Lady of Letters' is a dramatic monologue by Alan Bennett produced in 1988 and was a part of a series called 'Talking heads' which was written for the BBC. It is based on many different ordinary characters and their views on controversial subjects like racism, society and politics etcetera. The protagonist in 'A Lady of Letters' is Miss Irene Ruddock - a middle aged woman shown constantly to be annoyed about social changes around her. The changes include immigration, marriage, fashion and loss in the sense of community. Furthermore, the government was run by the Conservative party where Margret Thatcher was the first and to this day the only female Prime Minister. This boosted the equality between men and women. Women began to wear more provocative and 'manly' clothing -which caused disapproval from older generations. Due to the changes in media and society, Miss Ruddock has a tendency to write many letters of complaint, which is shown by her having already written a letter in the beginning of her monologue. The plot itself is set in the 1970s where many different factors change in society which somewhat upsets an 'old-fashioned' woman like Miss Ruddock. The title brings irony to the monologue as the word 'Lady' is associated with someone with a higher status however, Miss Ruddock does not have status as she does not play a major role in society. Also, 'a Lady of Letters' suggests that Miss Ruddock has professional qualifications, where in actual fact she does not. As Miss Ruddock's characteristics unfold the audience's interest is sustained in the play. The play is written as a dramatic monologue, and its genre is of a tragicomedy. A monologue allows the audience to observe the flow of thoughts and opinions in one character's mind ultimately leading to the discovery of others' opinions of the protagonist themselves. ...read more.

After I'd had my tea I sat in the front room in the dark watching the house.' This displays the sudden change of topic in her speech. This can be inferred as the changes of thought in her mind as the monologue is an account of her current thoughts and past memories. Also, it sustains the audience's interest as the audience then has more to focus on; ensuring that they concentrate harder and they do not have to listen to the same tedious subject throughout the whole of the play. The subject keeps on returning to the 'kiddy', which suggests that this matter is constantly on her mind. Moreover, another technique used by Alan Bennett to uphold the audience's attention is how Miss Ruddock's letter writing is very much harmless at first; 'I passed the place where there was the broken step I wrote to the council was a danger to the public.' This shows that Miss Ruddock's letter writing was used to help society which may be inferred as her thoughtfulness for the public which suggests that Miss Ruddock was a quite considerate woman before she started to get into trouble. However, it can also be inferred as Miss Ruddock only notifying the Government to simply point at their problems and the flaws that society had for her self-satisfaction. As the play progresses, Miss Ruddock's letter writing starts to turn more malicious where her purpose is to cause spite and problems between others; ' We're asking you because who was it wrote to the chemist saying his wife was a prostitute?'. This ultimately shows that Miss Ruddock wrote that letter to cause problems between others or because of her prejudiced nature. This only further causes herself problems when she thinks she is helping but really does not understand that she is in the wrong for nosing into others' business and drawing inaccurate conclusions. ...read more.

This can be inferred as Miss Ruddock's loneliness which caused her to behave in such a way in the past and that all the needed was love and attention to be who she really was; Irene Ruddock - not simply Miss Ruddock which she preferred to be called before she went to prison. This concept keeps the audience interested as it is an unorthodox and perhaps un-conventional storyline. Overall, Alan Bennett has used many techniques in the structure of the play to sustain the audience's interest. To conclude, Alan Bennett has used many techniques which successfully engage the audience's attention in a play with only one character. Some of the techniques he uses in this monologue include, versatile language and tones to keep the play lively and different, changes in subject and a varied structure of the play, complex and ultimately a very interesting development of the one character, and dramatic twists, pauses and blackouts which combined sustain the audience's attention by wanting them to find out more. By using un-conventional techniques and a dramatic and ironic storyline, Alan Bennett does well in keeping the audience's attention to one such inveterate letter writing character that follows a simplistic life. He has shown a generation's view on society and culture through the use of one character which can therefore be considered as an extended metaphor. This monologue is definitely successful in delivering its message across to its audience. In my opinion, the play kept my interest at all times and although I may have found certain characteristic traits of Miss Ruddock annoying, I still felt obliged to watch as my interest was in what was to happen next and in no doubt this feeling will have effected other viewers also. Therefore, Alan Bennett has successfully maintained and engaged the audience's interest in a play with only one character. ?? ?? ?? ?? Kirandeep Dhillon 10L ...read more.