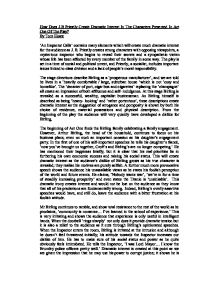 How Does J.B Priestly Create Dramatic Interest In The Characters Presented In Act One Of The Play? By Tom Hoare 'An Inspector Calls' contains many elements which will create much dramatic interest for the audience as J. B. Priestly creates strong characters with opposing viewpoints, a mysterious inspector who begins to reveal their secrets and a sympathetic victim whose life has been affected by every member of the family in some way. The play is set in a time of social and political unrest, and Priestly, a socialist, includes important issues linked to class division and a lack of people's moral responsibility. The stage directions describe Birling as a 'prosperous manufacturer', and we are told he lives in a 'heavily comfortable / large, suburban house 'which is not 'cosy and homelike'. The 'decanter of port, cigar box and cigarettes' replacing the 'champagne' all create an impression of both affluence and self- indulgence. At this stage Birling is revealed as a successful, wealthy, capitalist businessman. As Birling himself is described as being 'heavy- looking' and 'rather portentous', these descriptions create dramatic interest as the suggestion of arrogance and pomposity is shown by both his choice of residence, material possessions and physical description. ...read more.

As the Inspector slowly unravels his reason for being there, 'a young woman died in the infirmary,' more dramatic interest is created as both the audience and the Birling family would wonder why they were being questioned over this young girl's death. This soon becomes clear to Mr Birling as the Inspector tells him her name, 'Eva Smith...Do you remember her, Mr Birling?' Again, as Goole 'takes a photograph, and goes to Birling,' the audience would want to know what was on the photograph and why this was significant to Birling, thus creating dramatic tension and interest. Once the Inspector has uncovered Birling's part in the young girl's death he is told, 'Mr Croft is going to marry Miss Sheila Birling,' and 'gravely' tells Gerald, 'I'd prefer you stay.' This suggests Mr Croft is involved, but Croft doesn't ask why, which suggests he is hiding something, that there is more to him that meets the eye. The Inspector continues to ask open ended questions, and certain phrases indicate that it is not only Birling and Croft that have played a part in this innocent girl's death. The Inspector tells them all, 'a chain of events...May have driven her to suicide.' ...read more.

Throughout the play Eva Smith dominates the action visibly; she is depicted in an idealised way Gerald tells us 'she was very pretty,' and even Birling admits she was a 'lively, good looking girl... a good worker'. The audience would feel sympathy for Eva as she is depicted as the innocent victim. She represents the 'millions and millions and millions' of Eva Smiths that remain; the working classes that Priestly believed had the right to the same decent life as the Birlings. Priestly wanted people to learn that it is not acceptable to simply use people for 'cheap labour'. He uses the Inspector to get his points across and he should be regarded as Priestley's mouthpiece. The disruption of the Birlings' celebration is actually the disruption of their whole lives. The audience soon realises that all of the characters are implicated in the death of Eva and that, one by one, their secrets will be disclosed. They will want to know just how each member came into contact with Eva Smith and, see them face up to what they have done; perhaps be punished, and most importantly learn that the world does not revolve around them. In Act One the audiences curiosity will have been aroused, they will be keen to see how the rest of the play develops meaning audience interest is created. ...read more.