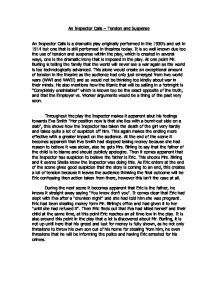 An Inspector Calls - Tension and Suspense An Inspector Calls is a dramatic play originally performed in the 1930's and set in 1914 but one that is still performed in theatres today. It is so well known due too the use of tension and suspense within the play, which is created in several ways, one is the dramatic irony that is imposed in the play. At one point Mr. Burling is telling the family that the world will never see a war again as the world is too technologically advanced. This alone would create an exceptional amount of tension in the theatre as the audience had only just emerged from two world wars (WWI and WWII) and so would not be thinking too kindly about war in their minds. He also mentions how the titanic that will be sailing in a fortnight is "Completely unsinkable!" which is known too be the exact opposite of the truth, and that the Employer vs. Worker arguments would be a thing of the past very soon. Throughout the play the Inspector makes it apparent abut his feelings towards Eva Smith "Her position now is that she lies with a burnt-out side on a slab", this shows how the Inspector has taken the death of the girl very hardly and takes quite a lot of suspicion off him. ...read more.

He does this by mentioning little things, therefore the characters come clean and the story starts to grow. This builds a lot of tensions because it's hard to tell what will happen next, and what the other characters have to do with Eva Smith. At one point Gerald asks, "I'd be glad if you would let me go", the Inspector agrees for him to go for a walk. This gives off a lot of tension, for a start as too why the Inspector would let him go and also if Gerald was holding back more and needed to go before it was pulled out of him. Next the Inspector shows the photograph to Mrs. Birling, it becomes apparent that Eva Smith had gone to Mrs. Birling who was head of the "Brumley Women's Charity Organization". Eva had gone there under the name of Mrs. Birling, which angered the real Mrs. Birling, Eva Smith had wanted help. She told Mrs. Birling how her husband had deserted her and the audience eventually finds out how she was also pregnant. Immediately the audience think the baby must be Gerald's, but this is crushed with the Inspector "(cutting in sharply) No. No. Nothing to do with him", this leaves the audience wondering who's it could be and also by Eric Mr. ...read more.

The inspector is quite a quiet character in the play, seemingly not needing the aid of lots of words to help him get what he wants from the other characters. The ending of the play raises a lot of questions about the inspector, if he wasn't the real inspector then who was he? And looking at it in some ways could raise the question what was he? What I mean to say is how could this 'inspector Ghoul' have known about the death of Eva before it even happened? And furthermore how did he know about each one of the families' links to Eva? Well here is my conclusion; I believe that the Inspector is the realization of a theory in one of Priestly's earlier books, the theory is that everyone is reborn when they die, over and over, but every time they live they meet one 'special' person that will give them the chance too move on, and in this case it was the Birling families 'special person', all they had to do was show repent and sorrow for what they had done, but Mr. and Mrs. Birling were just too proud to do that, and so after the 'inspector' left a real inspector called instead, informing them of the death of Eva Smith and that an inspector was being sent to talk to them, this is how the play ends. ...read more.