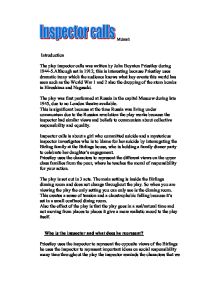 Mukesh Introduction The play inspector calls was written by John Boynton Priestley during 1944-5.Although set in 1912, this is interesting because Priestley uses dramatic irony which the audience knows what key events this world has seen such as the World War 1 and 2 also the dropping of the atom bombs in Hiroshima and Nagasaki. The play was first performed at Russia in the capital Moscow during late 1945, due to no London theatre available. This is significant because at the time Russia was living under communism due to the Russian revolution the play works because the inspector had similar views and beliefs to communism about collective responsibility and equality. Inspector calls is about a girl who committed suicide and a mysterious inspector investigates who is to blame for her suicide by interrogating the Birling family at the Birlings house, who is holding a family dinner party to celebrate her daughter's engagement. Priestley uses the characters to represent the different views on the upper class families from the poor, where he teaches the moral of responsibility for your action. The play is set out in 3 acts. The main setting is inside the Birlings dinning room and does not change throughout the play. So when you are viewing the play the only setting you can only see is the dinning room. This creates a sense of tension and a claustrophobic felling because it's set in a small confined dining room. Also the effect of the play is that the play goes in a real/natural time and not moving from places to places it give a more realistic mood to the play itself. Who is the inspector and what does he represent? Priestley uses the inspector to represent the opposite views of the Birlings he uses the inspector to represent important ideas on social responsibility many time throughout the play the inspector reminds the characters that we are as a community and are responsible for each other "we are responsible for each other" The ...read more.

This prepares us for someone who sticks by his word and does what he has come for where keeps his focus locked to the objective. How does he affect the other characters? Who are the other characters and how do they react to the inspector? He causes conflict in the family, who seem happy and united at the start but are divided at the end. Mrs Birling and Sheila fallout Mrs Birling is presented as a very confident character who is not prepared to change her views or accept any responsibilities "And in spite of what's happened to the girl since, I consider I did my duty so I prefer not to discuss it further, you have no power to change my mind". Priestly represents Mrs Birling as how some people have very self centred views and not willing to change their minds. The audience realises that Mrs Birling is likely to be proved wrong, as the inspector has already reveal everyone else responsibility. However Sheila is represented as the opposite she is presented as an open minded person who realises that she had done a wrong where she learns from her mistakes and accepts responsibility. "It's the only time I ever done like that, and I'll never, never do it again. The repetition of the word "never" suggests that Sheila wants the point to go over that she wouldn't do it again. The audience realises that Sheila is the one who is right, as the inspector proves that Mrs Birling is wrong. By comparing both the characters views both have opposite views about responsibility where one believes in acceptance and the other does not and learning from mistakes. Priestley's purpose is to create tensions by causing conflicts between each member. He questions the family and pushes them to reveal the truth and makes them confess "We all started so confident, so pleased with ourselves until he began to asking questions" She uses repetition of words "so confident, so pleased" to emphasise the felling they went before the inspector came. ...read more.

The audience after realise her change of character as the play carries on And the spoilt, princess that we know wears away and a responsible young adult emerges took the advice of the inspector "I remember what he said, how he looked, and what he made me feel. Fire and blood and anguish" The list of three creates fear and a sense of warning of how our future may hold making the viewer to get up and do something about it. Priestley's purpose is to show that there is hope for everything and if people try nothing is impossible. It is clear to the audience that Priestley represents the inspector as change to the greater good he makes characters understand the consequences in every action. What do we learn from the play? Through the actions that the Birlings took toward Eva smith we learn different assets of peace that they failed to show and represent. To start with when Mr Birling factory workers held a strike We learn that everyone is entitled with free expression and equal rights where Eva smith talks of raising their wages because they are women and she expresses how she feels to Mr Birling and gets sacked for it. Then we learn jealousy from Sheila toward Eva where she sabotage's her career in Millwards this causes hate and rivalry and leads to war and misuse of power leads to segregation. From Mrs Birling's scenario we learn in helping in others when they are in need, karma what goes around comes around as we learn through the end that the woman that she denied was holding her grandson. Through Eric's part we learn that every action has consequences and always use a condom. At the end of the play we are taught an important lesson about our responsibility for our actions and our responsibility to those less fortunate in society and change their way's but, but if men do not learn this lesson, they will learn it in fire and blood and anguish and more world war's will begin and humanity itself will seize to exist. ...read more.