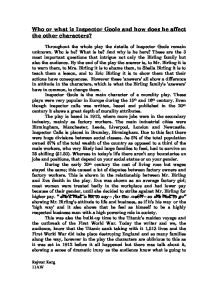 Who or what is Inspector Goole and how does he affect the other characters? Throughout the whole play the details of Inspector Goole remain unknown. Who is he? What is he? And why is he here? These are the 3 most important questions that intrigue not only the Birling family but also the audience. By the end of the play the answer is, to Mr. Birling it is to warn them, to Mrs. Birling it is to shame them, to Sheila Birling it is to teach them a lesson, and to Eric Birling it is to show them that their actions have consequences. However these 'answers' all show a difference in attitude in the characters, which is what the Birling family's 'answers' have in common, to change them. Inspector Goole is the main character of a morality play. These plays were very popular in Europe during the 15th and 16th century. Even though inspector calls was written, based and published in the 20th century it shows a great depth of morality attributes. The play is based in 1912, where more jobs were in the secondary industry, mainly as factory workers. The main industrial cities were Birmingham, Manchester, Leeds, Liverpool, London and Newcastle. Inspector Calls is placed in Brumley, Birmingham. Due to this fact there were huge divisions between social classes. As 5% of the total population owned 87% of the total wealth of the country as opposed to a third of the male workers, who very likely had large families to feed, had to survive on 25 shilling (�1.50). ...read more.

in conservatives and his ignorance to change in the upcoming future, and he also says that he should ignore "these cranks who tell us that everybody has to look after everybody else... and then one of those cranks walked in - the Inspector" showing the irony of the Inspector as this could be what the Inspector was, to transfer them from the time of conservatives to the time of socialists as if it was the same transference the audience went through after World War One and the downfall of the Titanic when so many lives were lost and destroyed. The Inspector arrived when they were celebrating a happy joyous event in the family only for the Inspector to come and changed the celebration completely to making them feel depressed and guilty. Mr. Birling is not entirely pleased by Inspector Goole's method of questioning or his tone. Mr. Birling is known to be very highly respected business man and is used to been spoke to with admiration and thought of with high opinion. These quotes show the manner of which the Inspector spoke to Mr. Birling; "Why should you do any protesting? It was you who turned the girl out in the first place." And when Mr. Birling tells the Inspector that he has made a "nasty mess" of their "celebration tonight" the Inspector retaliates by saying he felt the same when he saw Eva Smiths body, that someone had made a nasty mess of a lovely life. ...read more.

"we are members of one body...we are responsible for each other...and I tell you that the time will come when, if men will not learn that lesson, then they will be taught it in fire and blood and anguish" which is the exact opposite of what Mr. Birling said at the beginning showing the change in his timing and their life are the same; beginning to end and bad to good. Also no one else in the play saw the Inspector, but however the maid in the book does leading me to speculate on other theories as to who or what the Inspector is. I speculated that the Inspector could be physic as he knows not just what has happened but what will happen, Eva Smith's brutal suicide. He also makes reference to the war "fire and blood and anguish" is how he talks about it and we, the audience, know this to be true and this was how the war left us. However, I still believe that the Inspector was created by the Birling family and Mr. Croft consciences' to make them change and see their mistakes and learn from them, making every single one of the Birling family's answer in some way correct. And I feel that J.B.Priestley used the Inspector and the play to change us and teach us a lesson in morals, as every single one of us is a character in the play from Mr. Birling, the most self-righteous man, to Sheila Birling, the 'daddy's little princess'. ?? ?? ?? ?? Rajveet Kang 11AW ...read more.