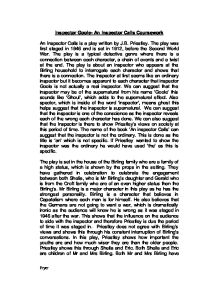 that Sheila felt shocked at the death of this woman Sheila also displays that she has a conscience as she says 'I can't help thinking about this Girl' Showing that she has a different attitude than her father. Gerald is also displayed to be a younger version of Mr Birling as he has similar views he says 'It is what happened to her after she Left Mr Birling's works that is important' This shows us that Gerald must have similar views to Birling and this could potentially be one of the reasons why Birling respects Gerald so much. Once Sheila learns of her connection to the young girl she feels remorseful she says 'I'll never, never do it again to anybody' Again Priestley is showing that the youth are wiser. The inspector is pleased by this response. Gerald also finds he has a connection to the young woman but knows her by another name, Daisy Renton. He complies and is hesitant to discuss what happened in front of Sheila. Mrs Birling comes across to be like her husband. She begins her interrogation feeling very confident and like her husband, tries to intimidate the inspector. Mrs Birling has no feelings towards the young woman and when she learns of her own involvement to the girl's death she takes no responsibility and says 'You're quite wrong to suppose I shall Regret what I did' This shows that she is not remorseful and Priestley through the inspector shows us how stubborn and callous the older people are. ...read more.

Priestley would use the inspector and devices to deliberately interrupt any conversation, which Birling would have on Capitalism, which showed his view. The inspector's first appearance, which interrupted Birling's conversation, was the first sign of what the inspector could be of. This showed that the inspector could have come as a warning to the Birling family. The inspector showed several times that he knew more than what an ordinary inspector would know. The inspector could have also have been an inspector of the conscience as each character had a connection to the woman's death due to something wrong they had done. Although not each character learnt from this. Priestley feels that the youth are very impressionable and so the inspector could be of the supernatural that has come to change the impression on the youth so that they can be responsible for each other. Priestley intended to show people the importance of the youth, as they are very influential he also intended to show how important it is for people to care for one another and not to selfish. This play is relevant for this period of time as the message, which Priestley has shown on everybody caring for one another and how important the youth are can be used for any period of time, as it is the basic ways of maintaining society. The inspector's omniscience is also created by the mystery, which the inspector created by knowing of the future, his ghostly presence and his advice given at his ending speech. ?? ?? ?? ?? Fryer ...read more.