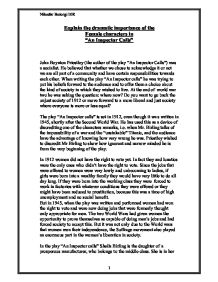 Explain the dramatic importance of the Female characters in "An Inspector Calls" John Boynton Priestley (the author of the play "An Inspector Calls") was a socialist. He believed that whether we chose to acknowledge it or not we are all part of a community and have certain responsibilities towards each other. When writing the play "An Inspector calls" he was trying to put his beliefs forward to the audience and to offer them a choice about the kind of society in which they wished to live. At the end of world war two he was asking the question: where now? Do you want to go back the unjust society of 1912 or move forward to a more liberal and just society where everyone is more or less equal? The play "An Inspector calls" is set in 1912, even though it was written in 1945, shortly after the Second World War. He has used this as a device of discrediting one of the characters remarks, i.e. when Mr. Birling talks of the impossibility of a war and the "unsinkable" Titanic, and the audience have the advantage of knowing how very wrong he was. Priestley wished to discredit Mr Birling to show how ignorant and narrow minded he is from the very beginning of the play. In 1912 women did not have the right to vote yet. In fact they and lunatics were the only ones who didn't have the right to vote. Since the jobs that were offered to women were very lowly and unbecoming to ladies, if girls were born into a wealthy family they would have very little to do all day long. If they were born into the working class they were forced to work in factories with whatever conditions they were offered or they might have been reduced to prostitution, because this was a time of high unemployment and no social benefit. ...read more.

Priestley has used Sheila to show that there may still be hope for the younger generation if they choose to be responsible. Priestley wanted to give the Inspector's message that society can only be a better place if people start to understand how their actions affects other peoples lives and how they may have unforeseen consequences. Before the Inspector's arrival when the family are dining, Mrs Birling seems very reserved and rather old with her own ideas of what is proper and what is not. She seems to be telling everyone how to behave themselves, although in a discreet manner. She scolds Sheila and Eric for picking on one another, and "reproaches" Mr Birling when he tells the maid to praise the cook for the dinner, in front of Gerald. In her opinion a woman's duty is to serve her husband dutifully, even if she has no respect for him as is the case with her and Mr Birling, and without asking any questions and understanding that "men with important work to do sometimes have to spend nearly all their time and energy on business" and therefore ignore their wives for however long it takes to settle their business affairs. All this and the fact that she tries to discourage her daughter from breaking her engagement with Gerald after hearing about his "disgusting" affair with Eva suggests that she has rather low values. When she first encounters the Inspector she tries to intimidate him by "grandly" reminding him that she is "Mrs Birling, y'know." And that she is sure they cannot help him much. She considers the Inspector very "rude", "impertinent" and "assertive". She does not seem to have any sympathy for Eva Smith and her situation. She thinks it was Eva's own fault that always landed her in trouble and she pointedly expressed her opinion that Eva Smith had only herself to blame for her situation and that she does not regret refusing her help for even a second. ...read more.

I admire Eva Smith because she wasn't afraid to stand up for her beliefs and was never afraid of bearing hardship because of her beliefs. The female characters indeed have a dramatic importance in bringing Priestley's message forward. Sheila is the bright light of hope for the new and younger generation who understand injustice and are prepared to mend their ways in order to build a better future. Mrs Birling is the representative of the old generation who quite simply refuse to admit their faults and mistakes and who were responsible for the war and most of the suffering in the society. Eva Smith is the representative of the people who are good and have a conscience. They feel responsible even though other people in society don't seem to care. They are the sufferers. Priestly uses Eva and Sheila to show that they are people in society who care or seem to be prepared to care and take responsibility. Mrs Birling is the one who refuses to see the reality and seems to hold on to the old world, and yet she seems to lose that grip fast because of people like Sheila. Priestley's message is somewhat still relevant today. There are still people in this society who seem to suffer. E.g. the homeless people who live on streets. But now days because there are a lot of people who only pretend to be homeless are on the streets, one doesn't know who is genuinely in need of help and who isn't. So Priestley's message is still relevant today to an extent, but I think that from 1945 society has come a long way and now is better equipped to help the needy. There is the benefit agency and the housing association to help people, but still a lot of people suffer because of pretenders who just want to take advantage of this system. Today social class hold no real meaning in society, and the Birling's of this society are those pretenders. Niloofar Bozorgi 10R 1 ...read more.