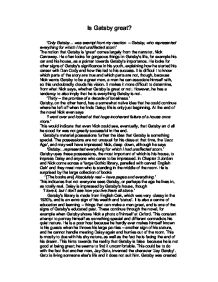 Is Gatsby great? 'Only Gatsby... was exempt from my reaction - Gatsby, who represented everything for which I had unaffected scorn' The notion that Gatsby is 'great' comes largely from the narrator, Nick Carraway. He often looks for gorgeous things in Gatsby's life, for example his car and his house, as a pointer towards Gatsby's importance. He looks for other signs of Gatsby's significance in his youth, explaining how he started his career with Dan Cody and how this led to his success. It is difficult to know which parts of the story are true and which parts are not, though, because Nick wants Gatsby to be a great man, a man he can associate himself with, so this undoubtedly clouds his vision. It makes it more difficult to determine, from what Nick says, whether Gatsby is great or not. However, he has a tendency to also imply that he is everything Gatsby is not. ...read more.

It is also a centre of education and learning - things that can make a man great, and is one of the signs of Gatsby's educated past. These continue through the novel, for example when Gatsby shows Nick a photo of himself at Oxford. This constant attempt to portray himself as something special and different contradicts his quiet nature. He is a poor host because he hardly ever makes himself known to his guests when he throws his large parties - another sign of his stature, and he cannot handle meeting Daisy again and hurries out of the room. This is mostly to due with his shy nature, as well as the fact he is facing the end of his dream. This hints towards the reality that Gatsby is false because he is not good at being great; he seems to find it uncomfortable. This could be to do with the fact that another man, Jay Gatz, invented the character 'Jay Gatsby'. Gatz is living someone else's life and it does not suit him. ...read more.

He is also, however, fake, na�ve and hollow. His dream, which he has been following for many years, is unrealistic. He believes that when he meets Daisy Buchanan again, everything will go back to the way it was before. It becomes apparent that if he ever fulfils this dream he will fall apart, because he would have nothing left in his life to chase and this indeed is the case when he meets Daisy. On the other hand, the character 'Jay Gatsby' has been created for one specific purpose: to be great. He does to some extent realise this ambition; he does not really need to be a fully rounded person because he is not fully real. James Gatz, on the other hand, is not great. The two characters are pretty much the same in terms of their physical nature - they are the same person physically, but they are also worlds apart; Gatsby is everything Gatz is not, which is the reason Gatz invented him. In this sense Gatsby is a great success; he has done what he needed to do. Everyone knows the name 'Jay Gatsby'. Word Count: 1,029 ...read more.