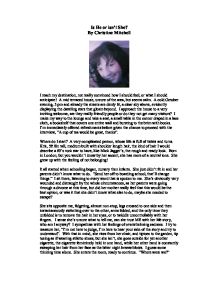 Is He or isn't She? By Christine Mitchell I reach my destination, not really convinced how I should feel, or what I should anticipate! A mid terraced house, unsure of the area, but seems calm. A cold October evening, 5 pm and already the streets are dimly lit, a clear sky above, evidently displaying the dazzling stars that gleam beyond. I approach the house to a very inviting welcome, are they really friendly people or do they not get many visitors? I make my way to the lounge and take a seat, a small table in the corner draped in a lace cloth, a bookshelf that covers one entire wall and bursting to the brim with books. I'm immediately offered refreshments before given the chance to proceed with the interview, "A cup of tea would be great, thanks". Where do I start? A very complicated person, whose life is full of twists and turns. Kris, 5ft 8in tall, medium built with shoulder length hair, the kind of hair I would describe a 60's rock star to have, like Mick Jagger's, the rough and ready look. Born in London, but you wouldn't know by her accent, she has more of a neutral tone. ...read more.

She withdrew herself once again from the world, in the hope of trying to 'sort' herself out. She returned to her flat, alone, trying to cope with and understand the whole situation. She struggled to cope with life, until she met a friend, who had been in a traumatic relationship, and was now stronger and able to cope, cope with both their life problems. So she married. They had a daughter, Laura. After six years the marriage had came to an end. She had to face up to the truth. She was working at this point as a nurse on a psychiatric ward, where she met Rachel. They worked long, hard hours, and their discussions became more and more intimate. She built up the courage one day, and told Rachel how she felt, and why she had feelings of confusion, Rachel in turn suggested that she take time out, and sort her life out, once and for all. Was there finally a reason for all this madness? She was prepared to find out! She moved away, away from her past, away from her troubles, perhaps. A fresh new start, did this then mean she had found her true inner self? ...read more.

She can finally talk to other people, people in similar situations, from possibly similar backgrounds. She attends a forum, that's where she met her partner, not any kind of forum, but a forum for transsexuals. You see Kris was actually born a boy, David Stanley, his life was and is complicated, but more so because of this fact, and the fact that his partner, Deana a woman was too also born a boy. On my journey home I start to think, now that she's a woman, she still feels unsure, unsure of what to expect and who she's going to become, inner feelings of wanting to experiment with being a man, wearing men's clothes, "But I'm afraid, afraid that I might want to become David again". What does this mean? Kris's still not happy. Why? She wanted to be a woman, and now she is. She's just giving up. Fed up with trying; fed up of trying to prove to others that she had made the right choices in her life. Did she? She now has the body of a woman, but still feels that she's neither a man nor a woman, somewhere in between. Is that possible? Why go through all of this? Who or what was she really trying to become? Who for, herself or her mother perhaps? Will she ever be happy being herself? Only Kris and time will tell. Words (1615) ...read more.