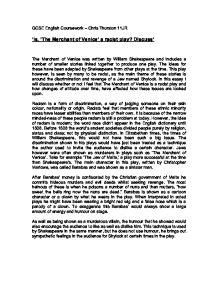 'Is, 'The Merchant of Venice' a racist play? Discuss'.

GCSE English Coursework - Chris Thurston 11JR 'Is, 'The Merchant of Venice' a racist play? Discuss' The Merchant of Venice was written by William Shakespeare and includes a number of smaller stories linked together to produce one play. The ideas for these have been adapted by Shakespeare from other plays at the time. This play however, is seen by many to be racist, as the main theme of these stories is around the discrimination and revenge of a Jew named Shylock. In this essay I will discuss whether or not I feel that The Merchant of Venice is a racist play and how changes of attitude over time, have effected how these issues are looked upon. Racism is a form of discrimination, a way of judging someone on their skin colour, nationality or origin. Racists feel that members of these ethnic minority races have lesser abilities than members of their own. It is because of the narrow minded-ness of these people racism is still a problem at today. However, the idea of racism is modern; the word race didn't appear in the English dictionary until 1508. Before 1508 the world's ancient societies divided people purely by religion, status and class; not by physical distinction. In Elizabethan times, the times of William Shakespeare, this would not have been such a big issue. The discrimination shown in his plays would have just been treated as a technique the author used to invite the audience to dislike a certain character. ...read more.

It may also be because he feels that Shylock is not worth arguing with, especially at this time, for he is nothing more than a Jew. Bassanio offers Shylock the chance to dine with him but Shylock insists, "I will buy with you, sell with you, talk with you, and so following. But I will not eat with you, drink with you or pray with you." This would shock an Elizabethan audience because they would all have been Christian and would not understand why anyone would have a problem with eating with Christians. A modern audience will also realise that this response is not acceptable. However the grounds of this short speech may not be entirely racial, but perhaps personal. Shylock's speech in act 3 scene 1 is a very famous one. Here Shylock compares Jews to Christians with the intention of showing they are the same. Shakespeare created this speech for the audience to better understand Shylock and to show the equality in the two races. The audience at the time may have sympathised slightly towards Shylock, despite thinking that he is still the villain, an impression also created by other techniques Shakepseare uses. Shylock states his reasons for hating Antonio, mentioning how he "mocked at my gains, scorned my nation, thwarted my bargains, cooled my friends, heated mine enemies." It is obvious that Antonio has been incredibly horrible to Shylock. Not only has he attempted to ruin Shylock's business but he has also attempted to destroy any social connections Shylock had. ...read more.

Had it been for this also, the element of racism may only have been included to attract a greater audience. The second possibility is that Shakespeare wrote the play to be a liberal eye opener for the better educated of his audience. Shylock's speech is the pivotal moment of the play in this regard. During the Elizabethan times this would have shocked audiences. It was extremely rare for anyone to be pro-Jewish as it was universally believed they were associated with the Devil. A modern audience would be moved by this but not shocked as they would already realise that the Jewish race was equal to each of their own. During Elizabethan times I don't think that this play would have been considered greatly controversial, however as times have changed so have, attitudes towards matters such as these. It is for this reason that by today's standards I believe that 'The Merchant of Venice,' is a racist play. However, I think that William Shakespeare did not write it with these intentions in mind. It is an informative piece that is consistent with the attitudes of society in the sixteenth century and for that reason valid in today's society. To convince me that the play was racist, Shakespeare would have had to have been blatantly more biased against Jews. The fact that in some cases he criticises the Christian actions and encourages us to feel sympathy for Shylock leads me to believe otherwise, I do not believe Shakespeare was condemning nor promoting racism but merely recognising and acknowledging it, being careful not to sway too far to either side. ...read more.