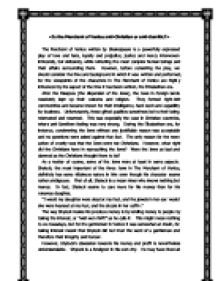 Is the Merchant of Venice anti-Christian or anti-Semitic?

<Is the Merchant of Venice anti-Christian or anti-Semitic?> The Merchant of Venice written by Shakespeare is a powerfully expressed play of love and hate, loyalty and prejudice, justice and mercy interwoven intricately, but delicately, while reflecting the most complex human beings and their affairs surrounding them. However, before consulting the play, we should consider the time and background in which it was written and performed, for the viewpoints of the characters in The Merchant of Venice are highly influenced by the aspect of the time it had been written, the Elizabethan era. After the Diaspora (the dispersion of the Jews), the Jews in foreign lands resolutely kept up their customs and religion. They formed right-knit communities and became known for their intelligence, hard work and capability for business. Unfortunately, these gifted qualities sometimes led to their being mistrusted and resented. This was especially the case in Christian countries, where anti-Semitism feeling was very strong. During the Elizabethan era, for instance, condemning the Jews without any justifiable reason was acceptable and no questions were asked against that fact. The only reason for the mere action of cruelty was that the Jews were not Christians. However, what right did the Christians have in reproaching the Jews? Were the Jews as bad and damned as the Christians thought them to be? As a matter of course, some of the Jews were at least in some aspects. Shylock, the most important of the three Jews in The Merchant of Venice, definitely has some villainous nature in him even though his character seems rather ambiguous. ...read more.

etc." When seen from another perspective, Shylock can be viewed as a godly, clean-living family man who merely wished to do his business unimpeded. He is only a man driven into revenge by mindless, unreasonable persecution and theft of his only child. He is a misguided soul who tried to get even within the law of those who hate him, only to be cruelly tricked a humiliated yet again. Jessica, Shylock's daughter is another main Jew in The Merchant of Venice. She is not a filial daughter, for she elopes with a Christian, Lorenzo, betraying her father, his faith and his religion. To make the matter worse for Shylock, Jessica also takes a considerable amount of his dear fortune and jewels. In any historical and moral case, a daughter betraying her father is unacceptable. However, was the elopement entirely Jessica's fault? It is true that Jessica took some part in the elopement and stealing her father's money. However, she was persuaded by Lorenzo and his love for her. In a way, Jessica is a victim of Lorenzo's deception. It could be seen that Lorenzo eloped with Jessica, knowing well that she would bring considerable sum of her father's money. Not very surprisingly, when the money is used up, Lorenzo's love for Jessica seems to be drying up at the same time. Yet, Lorenzo's behaviour towards Jessica changes once more when he hears the news of Shylock agreeing give his money to daughter. ...read more.

They condemn the Jews for what they are and no matter what the Jews do, nothing will change the Christian's perceptions. Jessica, who is married to Lorenzo, and therefore a Christian is still referred to as "yond stranger" and "infidel". The Merchant of Venice seems to contain both good and bad aspects of both the Christians and the Jews. Whether it is anti-Christian or anti-Semitic, one cannot decide, but it is true that Shakespeare had a deep understanding about the suffering and the behaviours, which resulted from racial prejudice. Shakespeare tried to write the story of mere human beings of different races, showing their lives and the way they dealt with them. He may have also wanted to say, "What is real justice? How can you draw a line between the justice and injustice and classify them? How can you even divide people into being justifiable or not?" He may have also wanted to tell people that appearance is not what you can be dependant on. That it may be something that you did not even dream of and maybe that it may have so much more to it than what you judged it to contain. Just like the Jews who were obsessed with money externally, but who started collecting money because they wanted to be accepted. Just like the Christians who looked like gentlemen externally, but who were nothing better than another race they despised. ...read more.