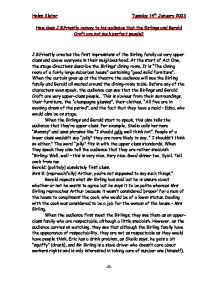 J.B.Priestly creates the first impressions of the Birling family as very upper class and above everyone in their neighbourhood. At the start of Act One, the stage directions describe the Birlings' dining room. It is "The dining room of a fairly large suburban house" containing "good solid furniture". When the curtain goes up at the theatre the audience will see the Birling family and Gerald all seated around the dining-room table. Before any of the characters even speak, the audience can see that the Birlings and Gerald Croft are very upper-class people. This is obvious from their surroundings, their furniture, the "champagne glasses", their clothes, "All five are in evening dress of the period", and the fact that they have a maid - Edna, who would also be on stage. When the Birlings and Gerald start to speak, this also tells the audience that they're upper class. For example, Shelia calls her mom "Mommy" and uses phrases like "I should jolly well think not". People of a lower class wouldn't say "jolly" they are more likely to say, " I shouldn't think so either." The word "jolly" fits in with the upper class standards. When they speak they also tell the audience that they are rather snobbish "Birling: Well, well - this is very nice. ...read more.

Eric tells us this. "Eric: ...She's got a nasty temper sometimes ..." Also Sheila tells us this herself when she replies to Eric with "Chump!" This word is not a very lady like word of the era she was in. Also the exclamation mark at the end of the word tells us that the word is said with force and that she actually means it and it isn't a joke. Sheila gives the audience the impression that she doesn't think before she speaks. She didn't think about Eva Smith when she gets her fired and she didn't think how Eric would feel when she called him "Chump!" or even when she called him "squiffy". The impact of the Inspector is to bring all of the characters' subtle flaws to the surface, revealing their true characters and what they are really like. Although the audience gets hints throughout the beginning of the play that Sheila has a bad temper, Mr Birling is a slave driver and Sybil is a snob we make allowances for this type of behaviour because it fits in well with their surroundings we accept this behaviour as normal because they are rich. The Inspector makes us realise that this shouldn't be the case. ...read more.

At the end of the play the audience gets the impression that they are all guilty in the same way. "As they stare guilty" "They" implies that the Birlings and Gerald Croft are all "guilty". Where the Birlings and Gerald live they are perfect people. Sybil is a volunteer for charity which helps people less fortunate than herself, Mr Birling was once a lower class citizen and has worked his way up to become a higher class citizen, but Mr Birling has forgotten where he came from. The Birlings and Gerald are all respected and trusted but if the people knew about the Eva Smith incident then the people wouldn't trust the Birlings and Gerald as much. The Birlings think they have nothing to hide. They don't realise what they have done until the inspector makes them realise, he makes them feel guilty. Everything in the play links together. If the Inspector questioned different people at different times then it wouldn't have linked together as well. Mr Birling keeps repeating the quotation "you have to look after yourself". The inspector challenges Mr Birlings' views. He says that if you do put yourself first and don't think of others the world will end it "fire, blood and anguish". Helen Slater Tuesday 14th January 2003 How does J.B.Priestly convey to his audience that the Birlings and Gerald Croft are not such perfect people? -1- ...read more.