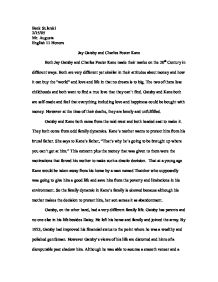 Beck Sularski 2/15/05 Mr. Augusta English 11 Honors Jay Gatsby and Charles Foster Kane Both Jay Gatsby and Charles Foster Kane made their marks on the 20th Century in different ways. Both are very different yet similar in their attitudes about money and how it can buy the "world" and love and life in that no dream is to big. The two of them lose childhoods and both want to find a true love that they can't find. Gatsby and Kane both are self-made and feel that everything including love and happiness could be bought with money. However at the time of their deaths, they are lonely and unfulfilled. Gatsby and Kane both came from the mid-west and both headed east to make it. They both come from odd family dynamics. Kane's mother wants to protect him from his brutal father. She says to Kane's father, "That's why he's going to be brought up where you can't get at him." This concern plus the money that was given to them were the motivations that forced his mother to make such a drastic decision. ...read more.

In1917, she represented everything fine and valuable in life. What he had not known was that she, like his dreams, was an illusion. Her wealth and her sophistication were only gilding. So both in the end had childhoods and that seems to explain why both felt they had a void they needed to fill. However both of them gain wealth and status as adults because they were taught how to earn a living. Both Gatsby and Kane had strong male figures in their lives that helped them get an education and learn how to be successful at being rich. Gatsby had Cody a friend who taught him street smarts and how to earn his money. Cody offered Gatsby an education and money for college and left Gatsby money until Cody's girlfriend found a way to take it for herself. That is why Gatsby learns how to fend for himself and how to make his own way because he learned no one was just going to hand it to him. ...read more.

Like Kane, Gatsby to wants to find love and he wants it by getting Daisy and winning back the girl he has loved for years. He thinks he can do that by showing off his riches and impressing her with his money. Also he thinks that he can easily renew the old relationship and make it perfect again. This is seen when he says to Nick the narrator "Can't turn back time?" No one can convince Gatsby that it is a fool's dream. In the end, both men don't get what they want at all. Kane ends up without a wife to love, and dead, still holding onto "Rosebud", the lost relic of his youth. Gatsby also ends up dead, without Daisy, and still holding onto the dream that she'll run into his arms and it will all be like it used to before he left her and before she married Tom. Both Kane and Gatsby are very similar and yet different in both their attitudes about love and how to get it and life and the way you should live it. In the end however both did not gain anything and died never fulfilling their dream entirely. ...read more.