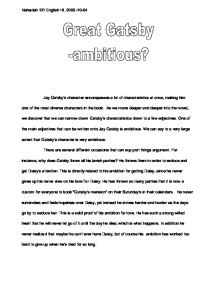 Jay Gatsby's character encompasses a lot of characteristics at once

He never surrenders and feels hopeless over Daisy, yet instead he strives harder and harder as the days go by to seduce her. This is a solid proof of his ambition for love. He has such a strong willed heart that he will never let go of it until the day he dies; which is what happens. In addition he never realized that maybe he can't ever have Daisy, but of course his ambition has worked too hard to give up when he's tried for so long. ...read more.

He isn't a part of the established wealth however through buying his way into everything, especially the social life and Daisy's heart; he thinks he can be a part of the East Egg lifestyle. His ambition for this position in society is very courageous and bold. At first his ambition for getting into his business and the upper-class life was so great that he even changed his name. He thought that the name Jay Gatsby had a more promising and lucrative sound to it than James Gatz. Obviously he was right, but we must admit that it wasn't his name that got him as far as he did; it was the ambition behind the name. ...read more.

This question asks candidates how F. Scott Fitzgerald's character of Jay Gatsby can be said to be ambitious. This candidate does very well to address some obvious and often overlooked aspects of the character of Jay Gatsby, originally James Gatz, in order to address the question. However, this candidate is not able to achieve any higher than a middle C grade because of the negligence with quotations and evidence from the source text they're analysing. Without these quotes, candidates' answers are stunted and regardless of the quality of the response to the question, they cannot expect to achieve a high grade, as everything the candidate says must be backed up with quotes from the source text to be considered an effective analysis.

Without quotes, the analysis is dubious. What the candidate does say they, is entirely indicative of someone who can achieve a sound B grade. There is an appreciation of often overlooked thematic elements such as Jay Gatsby's new name and what it says about himself; an illustrious, mysterious name with greater resonance than James Gatz. Also a promising analysis, is the commentary on Gatsby's parties and his obsessions with Daisy Buchanan.
To achieve higher marks, the candidate could've made more explicit the connection with Gatsby's ambition of Daisy. They comment very well on how he becomes obsessed with her, indulging in illegal acts in order to throw lavish parties to impress her, but the real blind ambition is in Gatsby's hopes that Daisy is still the woman she was when they were last together. However, that was five years ago, and it should be realised that Gatsby's ambition for Daisy is futile as she is no longer the woman she once was, and could never satisfy the image he has held in his mind and heart for five years.

The Quality of Written Communication is low, but only because there is very little confidence shown in writing. There are small sentences and a clear understanding of how to use simple punctuation, but further use of it could improve the answer.