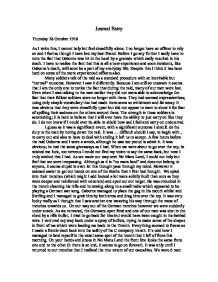 Journal Entry Thursday 28 October 1918 As I write this, I cannot help but feel dreadfully alone. I no longer have an officer to rely on and I feel as though I have lost my best friend. Before I go any further I sadly have to note the fact that Osborne was hit in the hand by a grenade which sadly resulted in his death. I have to realize the fact that this is all a new experience and soon incidents, like Osborne's death, will soon be a part of my everyday life. Despite this I think it has been hard on some of the more experienced officers also. Many soldiers talk of the raid as a standard procedure with an inevitable but "normal" outcome. However I saw it differently. Because I am still so unaware it seems that I am the only one to notice the fact that during the raid, many of our men were lost. Even when I was talking to the men earlier they did not seem able to acknowledge the fact that their fellow soldiers were no longer with them. They had seemed expressionless; using only simple vocabulary that had made them seem so withdrawn and far away. It was obvious that they were dreadfully upset but did not appear to want to show it for fear of spilling their sadness on the others around them. ...read more.

I ventured my way back under a spray of bullets, trying to make sense of the shapes in front of me which were leading me back to the Trench. Everything seemed to freeze as I made a frantic dash back into the safety of the C company trench. It's odd how I managed to land myself in the exact same spot of the trench that I left of from this morning. On your hands and knees in No Mans Land the front line looks the same from one end to the other (it there is an end, it seems to go on forever). It was only until I returned to our trenches that I realized the true extent of our casualties. We were 6 men down and 1 officer. At that point despite what others thought, as far as I was concerned the raid had been anything but a success. Sure, we had managed to catch one of the Boche, but was it really worth the lives of 7 men? I felt from participating in the raid that I should be with the other men in our company so we could share the weight of losing our friends. They asked me to join them for dinner; even though Stanhope had a celebratory feast lined up for me and the other officers. ...read more.

It was obvious now how much Dennis had really been struggling and had therefore taken to drowning his sorrows in drink. He had clearly been expressing his sadness in anger towards me as he did not think that I had even bothered to come and pass my condolences to Osborne, or as they had appeared to have been willing his death away, with them at dinner. Osborne's death must have been the final blow for him. I had really wanted for us to be able to help each other through this difficult time but instead Dennis sent me away, evidently embarrassed by how much emotion he had shown. And now here I am, having to do as many have and try to put the reality of difficult situations behind me and to move on. I now have to focus on the next challenge the war is going to throw at us, or in my case, the German attack. I'll be honest; I don't think that we will survive this. Our retreat plan will not allow us to escape the death that to soldiers is inevitable. There is no point in saying that we have a chance because we are completely outnumbered. But I have to say, when it does come, I know that every man along the line will be on their best performance, carrying out their duty, and ready for the inevitable ending. ...read more.