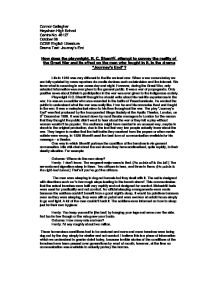 Connor Gallagher Heysham High School Centre No: 46127 October 08 GCSE English Literature Drama Text: Journey's End How does the playwright, R. C. Sherriff, attempt to convey the reality of the Great War and its effect on the men who fought in it, in the drama "Journey's End"? Life in 1918 was very different to the life we lead now. When a war occurs today we are fully updated by news reporters via media devices such as television and the internet. We know what is occurring in war zones day and night. However, during the Great War, only selected information was ever given to the general public. It was a war of propaganda. Only positive news about Britain's participation in the war was ever given to the indigenous society. Playwright R.C. Sherriff thought he should write about his real-life experiences in the war. He was an ex-soldier who was wounded in the battle of Passchendaele. He wanted the public to understand what the war was really like. How he and his comrades lived and fought in the war. It was a metaphorical mirror to his time throughout the war. The play "Journey's End" was first produced by the Incorporated Stage Society at the Apollo Theatre, London, on 9th December 1928. It was turned down by most theatre managers in London for the reason that they thought the public didn't want to hear about the war or they felt a play without women wouldn't be popular. The audience might have reacted in an unusual way, maybe in shock to the original production, due to the fact that very few people actually knew about the war. They began to realise that the half-truths they received from the papers or other media outlets were wrong. In 1928 Sherriff used the best form of communication available for his message - a theatre. One way in which Sherriff portrays the condition of the trenches is via general conversation. ...read more.

This is the only significant scene containing Hibbert. One person's characteristics in the play can signify hundreds of people whose experiences have mirrored that specific character. Whereas Hibbert was scared about the war, new recruit Raleigh had a reversed opinion about it. He was Hibbert's antithesis. Raleigh enters the scene a new soldier straight out of school. He hasn't a clue about the war and has believed all the propaganda the British public received. He thought he would go to the front line, stay there for a brief amount of time and return home a hero. This was far from the case. Being so na�ve he thought it would be exhilarating, but was not what he expected. Osborne: We are, generally [waiting], just waiting for something. When anything happens, it happens quickly. Then we just start waiting again. Raleigh: I never thought it was like that Osborne: You thought it was fighting all the time? Raleigh: (laughing) well, yes, in a way. He thought it was excitement and mind stimulation - a very good experience - but ended up sitting around just waiting for something to happen. The mood and atmosphere of the trenches was generally dull and extremely monotonous due to all the waiting. Sherriff again incorporated the process of using one character to portray an image of the typical soldier like that. This time it is used to show how youngsters straight from school accepted the war and how it differed from their expectations of it. The naivety and innocence of the soldiers are something which should not be endured at such a young age, but the army took on any man they could find - regardless of what it put him through. In my opinion, Raleigh's arrival also made the other soldier's think about what the British public have done to make an innocent young boy receive a false impression about the war. ...read more.

It needs to be left on a sort of question. This 'question' needs to be linked to the ending scene which sums up the entire performance. In this case it is the cataclysmic pinnacle of the death of every character, explaining to the audience that nearly every soldier in the Great War was killed or injured and was not an automatic hero. This relates to the mistaken belief Raleigh received about the war; How he has seen the reality of it through innocent eyes; How he has changed from the na�ve soldier he was a few days earlier to have a complete understanding of war: The people and their changing emotions, the sounds, the smells, the food, the death and much more. There are quite a lot of aforementioned events which happen within this production and they take their effect on different characters in diverting ways. But it's young Raleigh who has remained the same throughout it all. In a way it is slightly coincidental to make the character that is new and inexperienced the character that is the focal point of the play. His lack of knowledge and 'sucking up' to higher ranking soldiers isn't very convincing that he would become the 'hero' in the end. Personally, I think this is a very moving ending scene to a very well plotted production. It is very symbolic to the reality of war but on a very small scale, because in the war there were millions of different people. However, many of the soldiers shared the same views about the war, and I believe that Sherriff accumulated a 'spokesperson' for each group of likeminded people, and showed that this is just one story, but its veracity is multiplied an innumerable amount of times. I also think the play will have received more success in its time era compared to now. Our understanding on the realities of war is very contrasting to the 1920's as we are taught about it in schools and throughout life. Therefore I think its relevancy would be a lot weaker today due to our understanding of war we have now. ...read more.