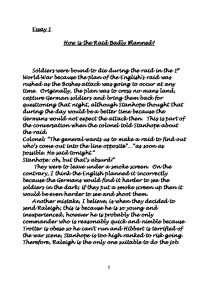 Essay 1 How is the Raid Badly Planned? Soldiers were bound to die during the raid in the 1st World War because the plan of the English's raid was rushed as the Boshes attack was going to occur at any time. Originally, the plan was to cross no-mans land, capture German soldiers and bring them back for questioning that night, although Stanhope thought that during the day would be a better time because the Germans would not expect the attack then. This is part of the conversation when the colonel told Stanhope about the raid. Colonel: "The general wants us to make a raid to find out who's come out into the line opposite"..."as soon as possible. He said tonight." ...read more.

probably the only commander who is reasonably quick and nimble because Trotter is obese so he can't run and Hibbert is terrified of the war scene, Stanhope is too high ranked to risk going. Therefore, Raleigh is the only one suitable to do the job. The plan was going to be really simple, go up in the smoke, take out the machine guns, and get a German. It may have been simple but the Germans were ready and their machine guns were trained on the points in which the Soldiers would come out, they knew where they would emerge because a German raiding party had appeared the previous night and tied red ribbon around the openings where the soldiers would make their attempt to attack them. ...read more.

He quickly changes Raleigh's thoughts by doing this and suddenly they are talking about black pigs in the New Forest. This takes Raleigh's mind off the raid and gets him to think about home and the happiness of the surroundings keeping him relaxed and ready for the tough challenge ahead of him. To conclude, the raid was successful, although badly planned because Osborne and 6 men died. As a result Stanhope was grieved because Osborne was his best friend, so he had lost the one person he could have man-to-man chats and laugh and joke with. ?? ?? ?? ?? 1 ...read more.