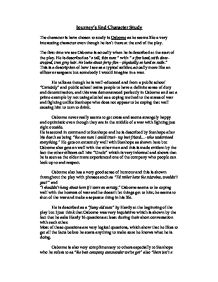 Journey's End Character Study - The character is have chosen to study is Osborne.

Journey's End Character Study The character is have chosen to study is Osborne as he seems like a very interesting character even though he isn't there at the end of the play. The first time we see Osborne is actually when he is described at the start of the play. He is described as "a tall, thin man " with " a fine head, with close-cropped, iron grey hair. He looks about forty-five - physically as hard as nails." This is a description of how I see as a typical solider, actually more like an officer or sergeant but somebody I would imagine in a war. He talks as though he is well-educated and from a public school "Certainly" and public school trains people to have a definite sense of duty and determination, and this was demonstrated perfectly in Osborne and set a prime example by not using alcohol as a coping method to the stress of war and fighting unlike Stanhope who does not appear to be coping that well causing him to turn to drink. Osborne never really seems to get cross and seems strangely happy and optimistic even though they are in the middle of a war with fighting just right outside. He is second in command to Stanhope and he is described by Stanhope after his death as being "the one man I could trust- my best friend...- who understood everything." ...read more.

sir ". Osborne is also very chatty and as soon as Raleigh arrives they immediately lost in conversation as though they have been friends for years. He takes young Raleigh under his wing as a newcomer and really displays his kindness and qualities as a friend. In the conversation with Raleigh, Osborne warns him that Stanhope will not be the same as when Raleigh last seen him. This shows that Osborne doesn't want it to come a shock to Raleigh or even hear nasty whispers about Stanhope when he is on duty or with the other men. Osborne tells him that it's the stain on Stanhope that has changed him but he doesn't mention Stanhope's drinking habits to Raleigh incase it shocks him. His shows that Osborne is aware of other people's feeling and he tries to protect them from something he knows they won't want to hear. Osborne tells Raleigh to think of the war as "romantic" and this shows me how they soldiers blank out the thought of war- by making it seem positive. Osborne admires Stanhope "You've done pretty well. An M.C. and a company" but strangely seems to look after Stanhope in a way, telling him "I wish you'd turn in and sleep for a bit" as Osborne can see that Stanhope is tired and he almost seems like the parent of this company, looking after everyone; Osborne also tells Stanhope that he "ought to go away for a rest". ...read more.

Osborne and Raleigh seem to get on well together and it seems right that they should go on the raid together. When they are about to go Raleigh leaves his wedding ring and watch behind claiming "I don't want the risk of losing it" but I think he can sense that there is a chance he won't make it back to the company again but he doesn't want to think about it and goes back to joking with Stanhope and the rest of the company such as "I do hate leaving a pipe when its got a nice glow on the top like that." When we realize that Osborne has been killed in action by a hand grenade while waiting for Raleigh it is very sad and a very abrupt ending to his part in the play. The fact that Osborne dies without Stanhope near him is very sad as we know how much Osborne loved Stanhope, he thought of him like family and we have lost a part of Stanhope almost as well. Osborne is not mentioned again except when Raleigh can't eat because he is too traumatised by his death but Osborne is from then on forgotten, he was an unsung hero. We can see that Osborne was liked by all the men and he seems almost perfect; caring for others, chatting and being friendly, looking out others and honouring his country. Osborne was a great man and he deserves to be a hero afer everything he has done for the company and for England. ...read more.