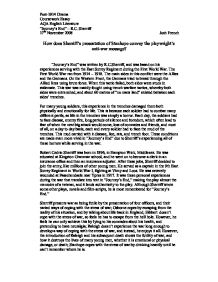 How does Sherriff's presentation of Stanhope convey the playwright's anti-war message? "Journey's End" was written by R.C.Sherriff, and was based on his experiences serving with the East Surrey Regiment during the First World War. The First World War ran from 1914 - 1918. The main sides in this conflict were the Allies and the Germans. On the Western Front, the Germans tried to break through the Allied lines using brute force. When this tactic failed, both sides were stuck in stalemate. This war was mainly fought using trench warfare tactics, whereby both sides were entrenched, and about 60 metres of "no mans land" existed between each sides' trenches. For many young soldiers, this experience in the trenches damaged them both physically and emotionally for life. This is because each soldier had to combat many different perils, as life in the trenches was simply a horror. Each day, the soldiers had to face disease, enemy fire, long periods of silence and boredom, which often lead to fear of when the next big attack would come, loss of comrades and friends, and most of all, on a day to day basis, each and every soldier had to face the mud of the trenches. This mud carried with it disease, lice, rats, and trench foot. These conditions are made even more vivid in "Journey's End" due to Sherriff's experiencing all of these horrors while serving in the war. Robert Cedric Sherriff was born in 1896, in Hampton Wick, Middlesex. ...read more.

By this I mean that Stanhope appears not to care about his past friendship with Raleigh, and instead rejects him and casts him aside, showing that war changes people, and changes their friendships with one another. Raleigh understands Stanhope's need for alcohol, but Stanhope doesn't realize this, nor could he ever realize that the friend he has known since childhood has grown so much, and become so much more mature that he understands Stanhope's plight, so doesn't feel the need to write home and tell his sister the truth about his drinking, only about the fact that Stanhope commands an entire company, and that he does it better than anyone else. However, Stanhope still doesn't believe the fact that anyone other than himself can understand his troubles, and half the time even he doesn't understand what is going on inside his head. This can sometimes bring his leadership qualities into doubt in his own mind more than anyone else's. "Look here, Osborne, I'm commanding this company."3 Stanhope says this line like he doesn't believe it, and it portrays a great amount of confusion, as well as the fact that Stanhope is clearly abusing his power. This more than anything highlights the point that Sherriff aimed to put forward through "Journey's End," which is that war is futile, pointless, and damages young men for ever. This surely conveys an anti-war message, and an extremely powerful message at that. Throughout the "letter scene", it is obvious that Sherriff wants to portray awkwardness through Raleigh's speech, as Raleigh is always stuttering and pausing. ...read more.

During Act 2 scene 2, Stanhope appears to be calm and happy at the start, but as Hibbert approaches the subject of leaving to go to hospital, Stanhope suddenly becomes enraged, and the effect of this stagecraft is that we begin to understand what Stanhope can and cant tolerate, and it is clear that Stanhope cannot tolerate cowardice in any of its forms, perhaps this is a reflection on Sherriff. However, it is interesting to see that during this scene, Stanhope's stage directions remain the same, whereas Hibbert is told to raise his voice, and beg and plead to go. Maybe this is because Stanhope is the one in control, not lost to his temper, and it is Hibbert that has lost his mind to fear of another day in the trenches. Throughout "Journey's End" Sherriff conveys an anti-war message, and he does this convincingly due to his personal experiences serving in the war. Some of the things described in "Journey's End" may have connotations of his own experiences, so it is very easy to imagine how life was like in the war, and imagine all the horrors the soldiers had to face, whether they are emotional or physical. 1 R.C Sherriff "Journey's End" Page 46 2 Ibid Page 26 3 Ibid Page 46 4 R.C Sherriff "Journey's End" Page 46 5 Ibid Page 46 6 Ibid Page 46 7 Ibid Page 25 8 Ibid Page 25 ?? ?? ?? ?? Post-1914 Drama Coursework Essay AQA English Literature "Journey's End" - R.C. Sherriff 17th November 2008 Josh French ...read more.

A solid analysis that shows some ranging around the text; however the points aren't explicitly related to the question even though there were lots of opportunities to do this. Also ensure that points are linked to one another and when one part of the play can be linked to another ensure that you explore the connections.