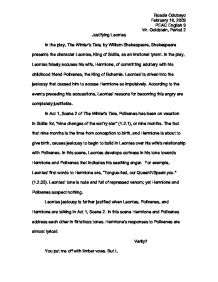 Justifying Leontes In the play, The Winter's Tale, by William Shakespeare, Shakespeare presents the character Leontes, King of Sicilia, as an irrational tyrant. In the play, Leontes falsely accuses his wife, Hermione, of committing adultery with his childhood friend Polixenes, the King of Bohemia. Leontes' is driven into the jealousy that caused him to accuse Hermione so impulsively. According to the events preceding his accusations, Leontes' reasons for becoming this angry are completely justifiable. In Act 1, Scene 2 of The Winter's Tale, Polixenes has been on vacation in Sicilia for, "nine changes of the wat'ry star" (1.2.1), or nine months. ...read more.

But I, Though you would seek t' unsphere the stars with oaths, Should yet say "Sir, no going." Verily, You shall not go. A lady's "verily" is As potent as a lord's. Will you go yet? Force me to keep you as a prisoner, Not like a guest, so you shall pay your fees When you depart, and save your thanks. How say you? My prisoner or my guest? By your dread "verily," One of them you shall be. (1.2.59-70) Whereas, Hermione's responses to Leontes are straightforward and unemotional: "But let him say so then, and let him go"(1.2.45). Also, in this scene the tone and word choice that Polixenes and Hermione use towards each other serve as another justification for Leontes' jealous rage. ...read more.

This only worsens his already jealous-sick mind. Hermione's use of the words "devils", "offenses", "sinned", "fault", and "slipped" caused Leontes' to believe that Hermione was admitting she's "sinned" with Polixenes, and that she was mocking him by admitting her "sin" right to his face. In conclusion, Leontes' seemingly unreasonable anger in the play The Winter's Tale, is not as uncalled for as it may seem. The coincidence of Polixenes being In Sicilia for nine months, the cheeky responses Leontes received from Hermione, and the flirtatious language used between Hermione and Polixenes are all factors in driving Leontes' into the jealous rage that caused him to accuse Hermione and Polixenes of adultery. Busola Odubayo February 16, 2009 PEAC English 9 Mr. Goldstein, Period 2 ...read more.