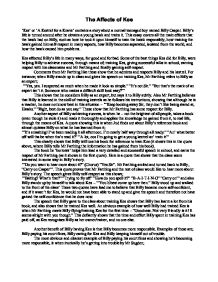 Kes affected Billy's life in many ways, for good and for bad

The Affects of Kes 'Kes' or 'A Kestrel for a Knave' contains a story about a normal teenaged boy named Billy Casper. Billy's life is turned around after he obtains a young hawk and trains it. This essay covers all the main effects that the hawk had on Billy, such as how he took it upon himself to train the hawk responsibly, how training the hawk gained him self-respect in many aspects, how Billy becomes separated, isolated from the world, and how the hawk caused him problems. Kes affected Billy's life in many ways, for good and for bad. Some of the best things Kes did for Billy, were helping Billy to achieve success, through means of; training Kes, giving successful talks in school, earning respect with his classmates and Mr Farthing and finally gaining self-respect. Comments from Mr Farthing like these show that he admires and respects Billy and his kestrel. For instance; when Billy stands up in class and gives his speech on training Kes, Mr Farthing refers to Billy as an expert; '"Yes, yes. I suspected as much when he made it look so simple." "It's not Sir." "But that's the mark of an expert isn't it. ...read more.

This leads us to believe that Billy wouldn't see himself as bad, and isn't looking for trouble, as this shows; "What's tha' gone over there for Casper, frightened?" Billy ignored him and continued to stare out. This shows he ignored what would lead to trouble and instead of opening his mouth and making a mountain out of a mole hill, he walked away. Another quote when Billy is getting changed shows that he tries not to get into trouble; "Well you should keep out of trouble then lad." "I haven't been in trouble Sir." This tells us that at least he's been trying. As with most things there too good to be true, and the downside of Kes, is that it makes Billy isolated from his friends, he becomes a loner. Tibbut's comment about Billy and his hawk in class show how he becomes isolated; "He's mad about it. He never knocks around wi' anyone else now, he just looks after his hawk all t'time. He's crackers wi' it." This is an example of how Billy has changed from his old ways; I think that it is good for him to be doing something different, as it keeps him out of trouble, which must be a good thing. ...read more.

Jud only wants to pester Billy, and when Billy doesn't oblige to tell Jud where the nest is, Jud punishes him, all for no reason at all. Billy, although trying his hardest to avoid trouble. Disobeys his brother's orders to place a bet on a horse (no bodies perfect, but I think if Billy knew the consequence of that, he would have placed that bet.). Billy gives Jud the reason to get back at him 'big time', and does so; "It's his fault. If he'd have put that bet on like he was told to. There would have been none of this" "He killed my hawk!" I felt sorry for Billy at the end of the book, but if he had just done that little thing, he could have saved Kes. This essay has shown that Kes has changed Billy. Billy turned over a new leaf since he started to care for Kes, as we found out when he achieved success; in school, while training Kes and helping him to read and apply gained knowledge from books to real life. Without Kes Billy wouldn't be as responsible as he is now, but he would also be more awake, earlier and punctual in school. Kes also gets Billy into trouble with Jud, who eventually kills her. One thing is for certain though; Kes changed Billy's life for ever. Robert Hanson 16 January 2005 ...read more.