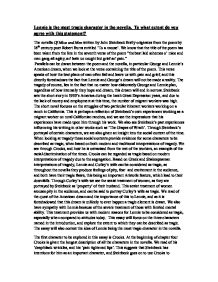 Lennie is the most tragic character in &quot; Of Mice and Men&quot; To what extent do you agree with this statement?

Lennie is the most tragic character in the novella. To what extent do you agree with this statement? The novella Of Mice and Men written by John Steinbeck firstly originates from the poem by 18th century poet Robert Burns entitled 'To a mouse'. We know that the title of the poem has been taken from the line in the seventh verse of the poem "the best laid schemes o' mice and men gang aft agley, an' lea'e us nought but grief an' pain." Parallels can be drawn between the poem and the novella, in particular George and Lennie's American dream, when we look at the verse containing the title of the poem. This verse speaks of how the best plans of man often fail and leave us with pain and grief, and this directly foreshadows the fact that Lennie and George's dream will not be made a reality. The tragedy of course, lies in the fact that no matter how elaborately George and Lennie plan, regardless of how intensely they hope and dream, this dream will end in sorrow. Steinbeck sets the short story in 1930's America during the harsh Great Depression years, and due to the lack of money and employment at this time, the number of migrant workers was high. The short novel focuses on the struggles of two particular itinerant workers working on a ranch in California. This is perhaps a reflection of Steinbeck's own experiences working as a migrant worker on rural Californian ranches, and we see the impressions that his experiences have made upon him through his work. We also see Steinbeck's past experiences influencing his writing in other works such as 'The Grapes of Wrath'. Through Steinbeck's portrayal of certain characters, we are also given an insight into the social context of the time. When looking at tragedy these social contexts provide evidence for some characters to be described as tragic, when based on both modern and traditional interpretations of tragedy. ...read more.

This therefore also foreshadows possibly misfortunes between these two characters, and again the femme fatal element of her is brought in by Steinbeck. In chapter four, some of Curley's wife's feelings towards her husband, and towards where she has ended up in her life, are revealed. "Sure I gotta husband... spends all his time sayin' what he's gonnar do to guys..." Here we can understand some of Curley's wife's feelings, and have some sympathy with her. Her attitudes towards Curley also portray her as tragic, as we know of Curley's characteristics and the sexist treatment towards women. However, even though we sympathize with Curley's wife at some points in the novella, some of this sympathy is lost when we read of her treatment of Crook's. Steinbeck has already portrayed Curley's wife as lonely at this stage, as she us talking to the men in the first place Steinbeck also seems to show a link between loneliness and tragedy, and this is shown in Curley's wife. The story line is set in a place called 'Soledad' and this can be linked to the word Solitaire, which means alone, and this is a metaphor for the loneliness of the characters in the novel. We can infer that Steinbeck has purposely used this place to show the loneliness in Curley's wife, and we see her need for companionship. Another tragic element can be found in Curley's wife based on this. We then read of her 'American Dream', "I tell ya I could of went with the shows...." This outburst from her arouses pity in the reader, as we know that these dreams would not be possible. This can be perceived as tragic because how she is stuck in the sexist context of the times, and based on how lonely she is. Curley's wife's actual death is not very surprising due to Steinbeck's use of foreshadowing, and the build up of dramatic tension. Curley's wife's death is firstly foreshadowed by the idea of her being a femme fatal. ...read more.

Most of the characters in Of Mice and Men admit, at one point or another, to dreaming of a different life. The novella shows the harsh reality of the American Dream, as each character looked at in this essay have their own dream which is not fulfilled. All the characters that are developed by Steinbeck in the novella wish to change their lives, but none are capable of doing so, and Steinbeck portrays each character as tragic based on the idea of the American Dream. Lennie is, in my opinion, the most tragic character based on the fact that he provides an element of warmth and humour to the novella, but then goes on to commit a crime completely by accident, which leads to him being murdered by the one person who really understands him in the novel. Therefore even though Steinbeck provides evidence for other characters to be regarded as the most tragic figure (looking again at the sexism and racism in Crooks and Curley's wife) I think Lennie is the most tragic character. I also think Lennie is the most tragic figure because of how he walks his way through life completely oblivious to the dangers of the world holding on so tightly to the dream of someday owning a farm, but this dream is so quickly crushed in a instant, and in doing this Steinbeck portrays Lennie as the most tragic figure in the novella. We also see Lennie's fatal ignorance of his own strength as his 'tragic flaw'. Also his mental disabilities and the effect they have on himself and George provide reasons for him to be said to be the most tragic character. In closing, we refer back to the poem, as Robert Burns is proved correct, as Steinbeck shows through the novella that the "the best laid schemes o' mice and men" really do "gang aft agley, an' lea'e us nought but grief an' pain." ?? ?? ?? ?? ...read more.