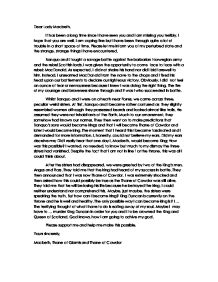 Letter to Lady Macbeth from her husband. Whilst Banquo and I were on a heath near Forres, we came across three, peculiar weird sisters.

Dear Lady Macbeth, It has been a long time since I have seen you and I am missing you terribly. I hope that you are well. I am coping fine but I have been through quite a lot of trouble in a short space of time. Please let me inform you of my perturbed state and the strange, strange things I have encountered. Banquo and I fought a savage battle against the barbarian Norwegian army and the rebel Scottish lords. I was given the opportunity to come face to face with a rebel; MacDonald. As expected, I did not shake his hand nor did I bid farewell to him. ...read more.

At first, Banquo and I became rather confused as they slightly resembled women although they possessed beards and looked almost like trolls. He assumed they were not inhabitants of the Earth. Much to our amazement, they somehow had known our names. They then went on to make predictions that Banquo's sons would become kings and that I will become Thane of Cawdor and later I would become king. The moment that I heard this I became fascinated and I demanded for more information. I, honestly, could not believe my ears. Did my ears deceive me; Did I really hear that one day I, Macbeth, would become King; How was this possible? ...read more.

They told me that he will be losing his life because he betrayed the king. I could neither understand nor comprehend this. Maybe, just maybe, the sisters were speaking the truth. But how can I become king? King Duncan is currently on the throne and he is well and healthy. The only possible way I can become king is if I... The terrifying thought of what I have to do is eating away at my soul. Maybe I may have to ... murder King Duncan in order for you and I to be crowned the King and Queen of Scotland. God knows, how I am going to achive my goal. Please support me and help me make this possible. Yours sincerely, Macbeth, Thane of Glamis and Thane of Cawdor ...read more.