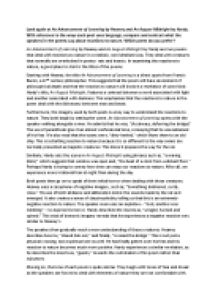 Look again at An Advancement of Learning by Heaney and An August Midnight by Hardy. With reference to the ways each poet uses language, compare and contrast what the speakers in the poems say about reactions to nature. Which poem do you prefer?

Transfer-Encoding: chunked ﻿Look again at An Advancement of Learning by Heaney and An August Midnight by Hardy. With reference to the ways each poet uses language, compare and contrast what the speakers in the poems say about reactions to nature. Which poem do you prefer? An Advancement of Learning by Heaney and An August Midnight by Hardy are two poems that deal with reactions to nature in a realistic, non-idealised way. They deal with creatures that normally are overlooked in poetry: rats and insects. In examining the reactions to nature, a good place to start is the titles of the poems. Starting with Heaney, the title An Advancement of Learning is a direct quote from Francis Bacon, a 17th century philosopher. This suggests that the poem will have an element of philosophical depth and that the reaction to nature will involve a revelation of some kind. Hardy?s title, An August Midnight, features a contrast between a word associated with light and another associated with darkness. ...read more.

Hardy describes the insects as, ?winged, horned and spined.? This triad of demonic imagery reveals that he experiences a negative reaction very similar to Heaney?s. The speakers then gradually reach a new understanding of these creatures. Heaney describes how he, ?stared him out,? and finally, ?crossed the bridge.? This is not just a physical crossing, but a spiritual one as well. He has finally gotten over his fear and his reaction to nature becomes much more positive. Hardy experiences a similar revelation, as he describes the insects as, ?guests,? towards the culmination of his poem rather than nuisances. Moving on, the tone of each poem is quite similar. They begin with tones of fear and dread as the speakers are forced to deal with elements of nature they are not comfortable with. The speaker in An Advancement of Learning mentions, ?my throat sickened,? whereas in Hardy?s poems the speaker is not so frank about his emotions. However, we can tell from his description of the insects that he is repulsed by them. ...read more.

Finally, we must consider the context in which the poems were written. An Advancement of Learning deals with Heaney?s childhood in rural Ulster. Heaney describes the river as, ?oil-skinned,? proving that he is not one to idealise his settings. This gives his poems an element of realism that readers can relate to, especially when it comes to his brutally honest reactions to nature. An August Midnight has an interesting context, as it could almost be considered a counter-argument for Darwinism. Hardy was an agnostic, and in the poem he wonders if humans really are superior to, ?God?s humblest.? Another way of looking at it is that it features Hardy alone: Heaney?s poem deals with a direct and involved reaction to nature, whereas Hardy deals with a more observational reaction. To conclude, both are poems that show how reactions to nature can change dramatically over a short period of time. Overall I prefer An Advancement of Learning, because it adds a dramatic and entertaining element to the speaker?s reactions to nature compared to Hardy?s more neutral approach. ...read more.