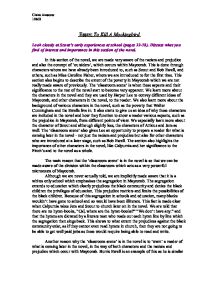 Look closely at Scout&amp;#146;s early experiences at school (pages 22-38). Discuss what you find of interest and importance in this section of the novel.

Essay: To Kill A Mockingbird Look closely at Scout's early experiences at school (pages 22-38). Discuss what you find of interest and importance in this section of the novel. In this section of the novel, we are made very aware of the racism and prejudice and also the concept of 'outsiders', which occurs within Maycomb. This is done through characters whom we have already been introduced to, such as Scout and Bob Ewell, and others, such as Miss Caroline Fisher, whom we are introduced to for the first time. This section also begins to describe the extent of the poverty in Maycomb which we are not really made aware of previously. The 'classroom scene' is when these aspects and their significance to the rest of the novel start to become very apparent. We learn more about the characters in the novel and they are used by Harper Lee to convey different ideas of Maycomb, and other characters in the novel, to the reader. We also learn more about the background of various characters in the novel, such as the poverty that Walter Cunningham and the Ewells live in. It also starts to give us an idea of why these characters are included in the novel and how they function to show a reader various aspects, such as the prejudice in Maycomb, from different points of view. We especially learn more about the character of Scout and although slightly less, the characters of Atticus and Jem as well. The 'classroom scene' also gives Lee an opportunity to prepare a reader for what is coming later in the novel - not just the racism and prejudice but also for other characters who are introduced at a later stage, such as Bob Ewell. The section also highlights the importance of other characters in the novel, like Calpurnia and her significance to the Finch's and to the novel as a whole. ...read more.

In a way, it also shows how Burris is resented because of, not only his attitude, but also because of the way he lives. It's ironic that although there is all this segregation, in different forms, within the white community in Maycomb, they come together for the trial of Tom Robinson in order to suppress the black minority. Confrontations caused by this poverty also highlight the segregation in Maycomb. The fact that Burris had "Been comin' to the first day o' first grade fer three year now" shows again the differences between the Ewells and the rest of the white community. The Ewells are further distanced from the rest of the white community due to the fact that "the Ewells are members of and exclusive society made up of Ewells." Although poverty is a unifying factor, we can see that the community is divided into people who make the best of the situation, and those who resent the poverty and use it as an excuse for the things they do which aren't seen as acceptable in Maycomb's society e.g. Little Chuck Little deals with the situation very well - he's a "born gentleman" although he "doesn't know where his next meal is coming from," and the Cunninghams who "don't have much, but they get along with it." However, the Ewells don't deal with it very well and instead of trying to deal with the crash, Bob Ewell makes the situation worse by "hunting and trapping out of season" and "spending his relief cheques on green whisky." They take advantage of the fact that they are "allowed certain privileges by the simple method of the 'common folk' becoming blind to some of the Ewells' activities." There is a lot of prejudice in Maycomb, both against the black community, and also against some members of the white community, but despite this, there is also a certain degree of tolerance in Maycomb, for instance, when Atticus tells Scout about how Bob Ewell is "permitted to hunt and ...read more.

We can see he is contemptuous and potentially violent. A description of him says that "He peered at Miss Caroline from a fist-sized clean space on his face." The words "fist-sized" are threatening - they suggest the violence of his character. These characteristics can all be found in Bob Ewell as well. He displays them in several parts of the novel, for example, when he attacks Scout and Jem. Another characteristic that can be found in both father and son is cowardice - as soon as anyone stands up to them, they back down, for instance in the classroom scene, "Burris seemed afraid of a child half his height", but will act tough once they are "safely out of range" and only then will they dare to retaliate "snot-nosed slut of a school teacher". Finally, this section emphasises Calpurnia's importance to the Finch's. She acts as a mother figure to the children and will discipline them without hesitation "Calpurnia sent me through the door to the dining room with a stinging smack." This shows how much a member of the family she really is and how important she is to helping the household run smoothly. This shows again how na�ve Scout is as she doesn't realise that the family "couldn't operate a single day without Cal." This section is relatively close to the beginning of the novel therefore a lot of it concentrates only on starting to create a sense of character and beginning to develop some of the broader themes throughout the novel. When reading it, this section does not appear important to the contribution of building up of character, developing themes or highlighting certain aspects of Maycomb but when analyzed and linked to section later in the novel, its significance becomes evident. If this section was not in the novel, a lot of the prejudice, poverty and racism within Maycomb would not be apparent very early on in the novel so instances later in the novel would not be as effective as conveying the prejudice, poverty and racism as a reader would not be as aware of it. Claire Ainscow 10MR ...read more.