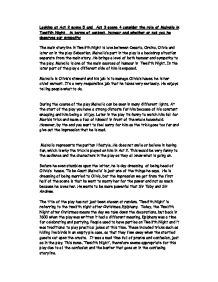 Looking at Act 2 scene 5 and Act 3 scene 4 consider the role of Malvolio in Twelfth Night in terms of context, humour and whether or not you he deserves our sympathy

Looking at Act 2 scene 5 and Act 3 scene 4 consider the role of Malvolio in Twelfth Night in terms of context, humour and whether or not you he deserves our sympathy The main storyline in Twelfth Night is love between Cesario, Orsino, Olivia and later on in the play Sebastian. Malvolio's part in the play is a backdrop situation separate from the main story. He brings a level of both humour and sympathy to the play. Malvolio is one of the main sources of humour in Twelfth Night. In the later part of the play a different side of him is exposed. Malvolio is Olivia's steward and his job is to manage Olivia's house; he is her chief servant. It's a very responsible job that he takes very seriously. He enjoys telling people what to do. During the course of the play Malvolio can be seen in many different lights. At the start of the play you have a strong distaste for him because of his constant snooping and him being a killjoy. Later in the play its funny to watch him fall for Maria's trick and make a fool of himself in front of the whole household. However, by the end you want to feel sorry for him as the trick goes too far and give out the impression that he is mad. ...read more.

He enters looking ridiculous in his yellow cross-gartered stockings. His constant smiling makes him appear mad, and he continually quotes the letter he found. Olivia thinks he has gone crazy. During the play Malvolio is badly treated by the other characters. In my opinion this is only through his own doing. Malvolio is seen in the eyes of the whole household as the party pooper. He takes his job very seriously. He is always very arrogant and tries to be manipulative to anyone that he thinks is doing anything they shouldn't. One of the first examples we see of Malvolio being bossy is in Act 1 Scene 5. He insults Feste the clown for his fooling. This is the first time we get a real idea what Malvolio is really like. Act 2 scene 3 is the best scene in the play to show Malvolio's personality. Sir Andrew, Sir Toby, Feste and Maria are all in the basement in Olivia's estate. The are drinking and singing very loudly. Malvolio goes to investigate what is going on. When he discovers what it is going on he is outraged and starts to shout at Sir Toby, threatening to throw him out. Sir Toby pays no attention to what Malvolio is saying. ...read more.

The final scene is just after the marriages of Olivia and Sebastian, and Orsino and Viola. The whole palace is full of laughter and cheer. Malvolio appears and ruins the mood. He has found out the true story and that he has been part of this clever ruse. He storms round the house shouting 'I'll be revenged on the whole pack of you. this is the last we see of Malvolio in the play. throughout the play you get mixed feelings for Malvolio. At the start it is funny to watch him make a fool of himself but towards the end you start to feel sorry for him because of all that he has been through over the play and the amount of times he has been humiliated. Malvolio is a strong character in the play. He plays an important part in twelfth Night being the main source of comedy. He is often the centre of attention in the play but not for good reasons. Initially he maybe deserved the trick that was played on him. However when it turns malicious we can see it is severely affecting him, and by the end of the play is screaming he will have "revenge" on the lot of them. Malvolio concludes the play on bad terms, being the only character to end the play without a happy ending. 2214 words Will Creech ?? ?? ?? ?? ...read more.