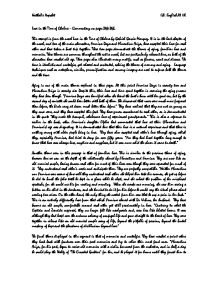 Love in the Time of Cholera - Commentary on pages 344-345. This excerpt is from the novel Love in the Time of Cholera by Gabriel Garcia Marquez. It is in the last chapter of the novel, and two of the main characters, Fermina Daza and Florentino Ariza, have accepted their love for each other and have taken a boat trip together. These two pages demonstrate the themes of aging, familiar love and memories. These themes are common throughout the entire novel, but are particularly relevant here, as both of the characters have reached old age. These pages also illustrate many motifs, such as flowers, scent and disease. The tone is idealistic and nostalgia, yet relaxed and contented, echoing the themes of memory and aging. Language techniques such as metaphors, similes, personification and sensory imagery are used to enforce both the themes and the tone. Aging is one of the main themes explored in these pages. At this point Fermina Daza is seventy two and Florentino Ariza is seventy six. Despite this, their love and time spent together is reversing the aging process they have been though. "Fermina Daza was horrified when she heard the boat's horn with her good ear, but by the second day of anisette she could hear better with both of them. ...read more.

They have become an old couple, comfortable around each other yet still passionately in love. "Contrary to what the Captain and Zenaida supposed, they no longer felt like newlyweds and, even less like belated lovers. It was although they had leapt over the arduous calvary of conjugal life and gone straight to the heart of love. They were together in silence like an old married couple wary of life, beyond the pitfalls of passion, beyond the brutal mockery of hope and the phantoms of disillusion: beyond love." The final theme displayed in this segment is that of memories and nostalgia. They have reached a point where they look back with fondness over their past memories and try to relive their most fond ones. "Florentino Ariza, for his part, began to revive old memories with a violin borrowed from the orchestra, and in half a day he could play the Waltz of "The Crowded Goddess" for her, and he played it for hours until they forced him to stop." This is the waltz that Florentino used to serenade Fermina with when they were first beginning their love, and in this way he is reliving his youth and becoming young again. Fermina's memories are changing, and with her new acceptance of love and life she is changing her perspective of her old memories. ...read more.

These both relate to Fermina and how her sense of smell is being affected by the boat trip. The final motif that is evident here is that of disease. Throughout the novel love is compared to diseases, especially to cholera, as in the title. On the boat trip Florentino had convinced the captain of the boat to raise the cholera flag, so that they would not have to take on board any more passengers, and could be alone in their love. There is only one mention of this in this section, "some villages fired charitable cannons for them to frighten away the cholera, and they expressed their gratitude with a mournful bellow." This does not much relate to love, however it does reinforce the idea that their passion is a disease and taking over their bodies. The tone of these pages is relaxed, accepting and nostalgic. Although many pejorative words such as "exhausted", "horrified" and "sorrow" are used at points, they are used to contrast the joy that the passengers are feeling. In the sentence, "During the day they played cards, ate until they were bursting, took gritty siestas that left them exhausted, and as soon as the sun was down the orchestra began to play, and they had anisette with salmon until they could eat and drink no more", various negative words are utilised but in the context they have positive connotations. ...read more.