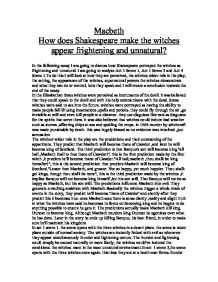 How does Shakespeare make the witches appear frightening and unnatural?

In the following essay I am going to discuss how Shakespeare portrayed the witches as frightening and unnatural. I am going to analyse Act 1 Scene 1, Act 1 Scene 3 and Act 4 Scene 1.To do this I will look at how they are perceived, the witches wider role in the play, the setting, the appearance of the witches, supernatural powers the witches demonstrate and what they can do or control, how they speak and I will create a conclusion towards the end of the essay.

In the Elizabethan times witches were perceived as instruments of the devil. it was believed that they could speak to the devil and with his help communicate with the dead. Some witches were said to see into the future. witches were portrayed as having the ability to make people fall ill using incantations ,spells and potions .they could fly through the air ,go invisible at will and even kill people at a distance. they use disguises like cats as disguises for the spirits that serve them. it was also believed that witches could induce bad weather such as storms ,affecting ships at sea and spoiling the crops. in 1564 murder by witchcraft was made punishable by death. this was hugely biased as no evidence was involved ,just accusation.

The witches' wider role in the play are the predictions and their summoning of the apparitions. They predict that Macbeth will become thane of Cawdor ,and later he will become king of Scotland. The third prediction is that Banquo's son will become king.''all hail ,Macbeth !hail to thee thane of Cawdor!'', this is the first prediction made by the first witch ,it predicts he'll become thane of Cawdor.''All hail,macbeth ,thou shallt be king hereafter!'', this is the second prediction  that predicts Macbeth will become king of Scotland.''Lesser than Macbeth, and greater. Not so happy, yet much happier. Thou shallt get kings, though thou shallt be none'', this is the third prediction made by the witches ,it implies Banquo will not become king himself ,but his son will. That Banquo will not be as happy as Macbeth, but his son will. The predictions influence Macbeth into evil. They generate a vaulting ambition with Macbeth.Basically the witches trigger a whole chain of events in the story, they predict he'll become 'thane of Cawdor' and shortly after they predict this it becomes true. once Macbeth sees there is some clarity ,reality and slight truth in what the witches have said he becomes to focus on becoming king and he begins to do anything possible to ensure he gets it. The predictions actually make Macbeth kill king Duncan to become king. Although Macbeth murders king Duncan he agonizes over what he has done. Later in the story he ends up killing Banquo, his best friend, in order to make sure he'll maintain his kingdom.

In act 1 scene 1. the scene opens with the three witches in a desert place. the scene is taken place outside of normal society. The witches are instantly linked with evil as whenever they appear simultaneously thunder and lightening occurs. The thunder and lightening could simply be caused naturally or more likely, the witches could've induced the conditions. the witches  meet in the most unnatural environment.In act  1 scene 3.the scene opens with the three witches once again. this time they are at a heath near forres.thunder and lightening ,again.the heath is outside normal society, htis could be mirrored into the witches ,as they are social outcast - for their own reasons. In act 4 scene 1 the scene opens in a cavern. the witches are situated around a cauldron. thunder is heard once again.the cauldron symbolises evil and they are performing mystical  incantations and spells around it.i think the setting the witches appear in relates well to the title and makes them seem frightening and unnatural.

''So wither'd and so wild in their attire ,that look not like the inhabitants o' the earth, and yet are on't?live you? or are you aught that man may question? you seem to understand me ,by each at once her chappy finger laying upon her skinny lips: you should be women yet your beards forbid me to interpret that you are so'', this shows that Banquo recognizes the witches unnatural element, they are of no sex ,they are supposed to be women yet they have beards and this makes them neutral gender-not natural. they are subverting sexuality.

The witches have supernatural powers. there are certain limits to these powers. they cannot directly kill people ,but they can kill people at a distance. in act 1 scene 3 the first witch is killing a sailor ,not directly though.''...though his bark cannot be lost, yet it shall be tempest tost...'',this is the quotation that is most important when talking about the powers of the witches as it indicates that the witches have evil intentions but they cannot directly perform them. it tells us that although they cannot kill the sailor by direct murder they can induce/trigger off chains of events that can lead to his death. they can induce weather conditions such as storms-tempests. the above quotation also backs up the statement that I said earlier that the witches can create thunder when they appear in scenes. it could also be argued that the witches can plant ideas in peoples heads or just generally mess with their minds.''So foul and fair a day I have not seen'', these are the words of  Macbeth ,they are extremely similar to the words of one of the witches. the fact that Macbeth is subconsciously speaking the words of one of the witches suggests that the witches are planting ideas or words in Macbeth’s mind using telepathy.

Another indication of the witches evilness is the way they speak and what they say. they speak in rhyme.''when the hurlyburly's done, when the battles lost and won.'',they speak in great rhyme. they can rhyme automatically-without thinking ,its unnatural. although they speak in complicated rhyme it still makes sense, the quotation above shows 'balance' if someone wins a battle someone else loses. also the balance could mean balance of winning ,you cannot win all of the time,Macbeth was on a winning streak- thane of Cawdor, king ,and the win-lose balance for Macbeth was restored by Macduff killing Kim. we hear of Macbeth before we see him ,this is because the witches speak of him.’ there to meet with Macbeth.'', they are already planning to meet him. this also could strengthen the statement I mentioned earlier about witches being able to see into the future ,they know where Macbeth will be in the future ,that’s how they're planning to meet him. I come greymalkin!',this quotation gives me the idea that Macbeth is linked to their pets ,this suggests that the witches don't take the fact that they are basically killing people ,Macbeth,and that they see all the events as a game. the witches are linked with evil and brutality. the witches always talk about dark and  miserable events ,such as the mischief they've been up to for example''..And like a rat without a tail...'', the witch is referring to the unnatural conditions that she has caused , not allowing wind for a sailor out at sea. Another example of the witches acts is ''..I will drain him as dry as hay..'', a witch is bragging of the deeds that she has done, not allowing food or water so basically death. the witches make dark ,gloomy and evil visual representations due to their choice of words to describe their evil deeds, also the fact that they can speak in perfect rhyme also adds to their evil imagery, it’s not natural to be able to speak like they do , it requires great skill. also the fact that they speak in exact sequence and poetic like speaking its as if all their minds are linked.

Now, I will draw a final conclusion of the witches. I believe that the witches are truly unnatural and frightening. the following sentences will back up my accusations that the witches are truly unnatural, evil and frightening. they are of no sexuality, women with beards-unnatural. they have supernatural powers, they can induce bad weather conditions such as storms and windless conditions ,to cause harm to people ,especially sailors. they can see into the future ,this could be a huge help to people and society yet the witches use them to make truthful but misleading predictions ,that in a shortfall kill Macbeth, that seem like a little game of the witches- causing mischief and trouble. the setting where the witches appear are always dark and dismal places outside of normal society, upon the heath, in a cavern, a desert place its almost like the witches have been exiled from normal society. the witches seem to   fit in perfectly to the settings they choose, this also makes them seem more evil in their chosen settings their no amenities for natural survival, this suggests they are unnatural as they never eat or drink. their clothes also indicate that they're unnatural because they are always underdressed ,in the highland of  Scotland they would get hypothermia and die ,they seem to be immortal. the way they speak makes them seem evil as its like they are the devils representative ,its like the devils voice is being projected through the three witches, this could explain how the witches speak in sequence.