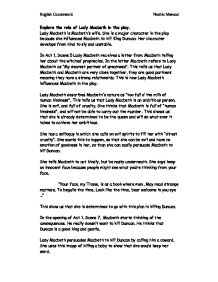 Explore the role of Lady Macbeth in the play.

Lady Macbeth is Macbeth’s wife. She is a major character in the play because she influences Macbeth to kill King Duncan. Her character develops from kind to sly and unstable.

In Act 1, Scene 5 Lady Macbeth receives a letter from Macbeth telling her about the witches’ prophecies. In the letter Macbeth refers to Lady Macbeth as “My dearest partner of greatness”. This tells us that Lady Macbeth and Macbeth are very close together, they are good partners meaning they have a strong relationship. This is how Lady Macbeth influences Macbeth in the play.

Lady Macbeth describes Macbeth’s nature as “too full o’ the milk of human kindness”. This tells us that Lady Macbeth is an ambitious person. She is evil, and full of cruelty. She thinks that Macbeth is full of “human kindness”, and will not be able to carry out the murder. This shows us that she is already determined to be the queen and will do what ever it takes to achieve her ambitious.

She has a soliloquy in which she calls on evil spirits to fill her with “direst cruelty”. She wants this to happen, so that she can be evil and have no emotion of goodness in her, so than she can easily persuade Macbeth to kill Duncan.

She tells Macbeth to act kindly, but be nasty underneath. She says keep an innocent face because people might see what you’re thinking from your face.

“Your face, my Thane, is as a book where men, May read strange matters. To beguile the time, Look like the time, bear welcome in you eye …”

This show us that she is determined to go with this plan in killing Duncan.

In the opening of Act 1, Scene 7, Macbeth starts thinking of the consequences. He really doesn’t want to kill Duncan. He thinks that Duncan is a good king and gentle.

Lady Macbeth persuades Macbeth to kill Duncan by calling him a coward. She uses this image of killing a baby to show that she would keep her word,

“I would, while it was smiling in my face, have plucked my nipple from his boneless gums, and dashed the brains out…”

This violent image demonstrates how focused Lady Macbeth is at this point of the play. She will stop at nothing to get what she wants. This shows us that she is happy to use violence.

I think that if Lady Macbeth hadn’t persuaded Macbeth so profoundly, then Macbeth would have not killed King Duncan. Macbeth unlike Lady Macbeth has some emotion in him about killing the king.

In Act 2, Scene 2 Lady Macbeth is waiting for Macbeth to see if he killed King Duncan. Lady Macbeth doesn’t kill King Duncan herself because he reminded her of her father.

“Had he not resembled my father as he slept, I had done’t.”

This shows us that she has a little guilt and compassion left in her. This is the only reason why she doesn’t kill the king.

When Macbeth returns he is already starting to regret what he has done, and is beginning to panic. Here Lady Macbeth takes control, by returning the daggers to the scene of the crime and telling Macbeth he is “infirm of purpose”. This shows us the she is strong and determined.

Lady Macbeth says, “A little water clears us of this deed”, here she thinks that getting the physical thing away, it will be like they never killed the King but in Act 5, Scene 1 it is ironic because Lady Macbeth dreams she cannot wash the stain of blood from her hand.

In Act 5, Scene 1 Lady Macbeth has become mentally ill because she is talking about the murder while sleepwalking. Her mad ramblings have been brought on by her guilt about the murders she’s been involved in: Duncan’s, Lady Macduff’s and Banquo’s.

She is writing a letter and than reading the letter. Perhaps it’s about compassion, perhaps referring back to Act 1 Scene 5. This suggests that Lady Macbeth is disturbed, weak and is feeling guilty about her actions.

She and Macbeth killed Duncan in his sleep so now she is sleep walking; she has lost her peace in her sleep.

Lady Macbeth is trying to rub her hands to wash “spots” of imagined blood off her hands. Here she feels that she still has Duncan’s blood on her hands. She is disturbed, anxious and guilt-ridden of what she has done and cannot forget it.

The Doctor and Gentlewoman’s attitude toward Lady Macbeth is that they would never change places with her. The Doctor says that there is nothing wrong with Lady Macbeth’s health and he can no further do anything.

Lady Macbeth was the brains of the murder. She controlled the situation from the very start and planned out the murder of Duncan. She drugged

the guards and nearly went as far as murdering Duncan but she couldn’t do it at the end because he reminded her of her father. Therefore, this shows that although she had the courage to plan out everything to the last possible detail, she didn’t have the courage or bravery to murder him and she wasn’t as bold as she made out.

Act 1, Scene 5 Lady Macbeth is evil, confident and cunning but than her character changes in Act 5, scene 1 to weak, guilt-ridden and remorseful. I think that her illness and death were the punishment for her action toward the murder; she was the cause of everything that happened. If it weren’t for her greed things would have followed as planned but not in the sequence of events that it happened. She was so determined to be Queen that she destroyed her and her husband’s life and also the life of others. Her power and masculinity was too much for Macbeth to handle, and was easily pressured into doing things he would never have thought of doing. Lady Macbeth had all the control over Macbeth’s life.