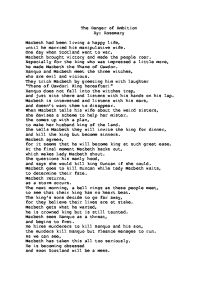 The Danger of Ambition By: Rosemary Macbeth had been living a happy life, until he married his manipulative wife. One day when Scotland went to war, Macbeth brought victory and made the people roar. Especially for the king who was impressed a little more, he made Macbeth the Thane of Cawdor. Banquo and Macbeth meet the three witches, who are evil and vicious. They trick Macbeth by greeting him with laughter "Thane of Cawdor! King hereafter!" Banquo does not fall into the witches trap, and just sits there and listens with his hands on his lap. Macbeth is interested and listens with his ears, and doesn't want them to disappear. When Macbeth tells his wife about the weird sisters, she devises a scheme to help her mister. ...read more.

Macbeth gets what he wanted, he is crowned king but is still taunted. Macbeth sees Banquo as a threat, and begins to fret. He hires murderers to kill Banquo and his son, the murders kill Banquo but Fleance manages to run. As we can see, Macbeth has taken this all too seriously. He is becoming obsessed and soon Scotland will be a mess. People are beginning to catch on, that it's been Macbeth killing these people all along. Macbeth runs into the witches again, and the witches planned to make Macbeth's life bend. They summon apparations each of which offers a prediction to allay Macbeth fears, that will eventually bring him to tears. ...read more.

England wants to go to war, for Scotland can't take no more. Their king and queen can not rule, and they make their country look like fools. Macbeth believes he can not be harmed, from what the witches told him he believes he is charmed. But Macbeth's confidence is shaken, when trees from Birnam Woods are taken. Macbeth does not care and remains superior, but soon will be inferior. Macbeth is about to be defeated by Macduff, who has had enough. Macduff reveals his mother had a c section, which taught Macbeth a real great lesson. The witches have tricked Macbeth, and now everything he's done he regrets. Macbeth is now dead, and now Scotland will be properly led. Macduff announces to Scotland that Malcolm is now ruler, and order is restored because Malcolm will be truer. ...read more.