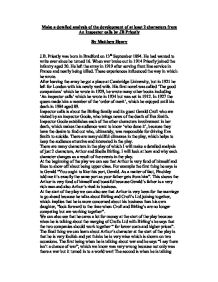 Make a detailed analysis of the development of at least 2 characters from An Inspector calls by JB Priestly By Matthew Henry J.B. Priestly was born in Bradford on 13th September 1894. He had wanted to write ever since he turned 16. When war broke out in 1914 Priestly joined the infantry aged 20. He left the army in 1919 after serving front line service in France and nearly being killed. These experiences influenced the way in which he wrote. After leaving the army he got a place at Cambridge University, but in 1921 he left for London with his newly wed wife. His first novel was called 'The good companions' which he wrote in 1929, he wrote many other books including 'An inspector calls' which he wrote in 1934 but was set in 1912. In 1927 the queen made him a member of the 'order of merit', which he enjoyed until his death in 1984 aged 89. Inspector calls is about the Birling family and its guest Gerald Croft who are visited by an inspector Goole, who brings news of the death of Eva Smith. Inspector Goole establishes each of the other characters involvement in her death, which makes the audience want to know 'who done it', because they have the desire to find out who, ultimately, was responsible for driving Eva Smith to suicide. ...read more.

However both characters show similarities in the opening sequence, for example they both think of themselves very highly as if they were important to society. This is shown in Sheila when she thinks all the attention should be on her, when her father is talking to Gerald about business, Mrs Birling says that they should not be talking about business on such an occasion followed by Sheila in agreement with her mother who says "Neither do I. All wrong". This self-importance is also shown in Arthur when he talks to Gerald about himself possibly being knighted, he tells Gerald this because Gerald's mother is not to keen on the marriage, hoping that she will hear of this because he knows this marriage will help his business in making more money. " I might find my way in to the next honours list. Just a knighthood of course". We can learn more about the characters from when the inspector enters, and their reactions to him when he reveals the death of Eva Smith. When Arthur hears how he has been involved with the death of Eva Smith because he fired her from a job she had at Birling's, he appears a very reluctant/stubborn character to accept any responsibility for her death " I can't accept any responsibility". He again reveals how he has a concern and pride in his business when explaining why he fired Eva Smith, "It is my duty to keep labour costs down......we were paying the usual rates". ...read more.

father Sheila seems to join in the accusation of him, because Arthur defends himself as if he had nothing to do with it, then Eric says "that might have started it" and so Sheila says "did you, dad?" as if what he had done was so terrible that she couldn't believe it. Therefore it appears that they do not have a very good relationship. By the end of the play when it is revealed that the inspector is an impostor we can learn a little more about their characters. What is clear to us as the audience is that Arthur's attitude does not change through out the entire play and he remains stubborn and learns nothing from what inspector Goole has highlighted, and so continues as he would have done before, "the famous younger generation who know it all. And they can't even take a joke". This shows that Arthur remains a stubborn "hard headed businessman". In contrast Sheila again is the total opposite to her father. She still feels guilty and is a kind hearted girl because she realises she is going to have to change her ways, she tells the others " you're just beginning to pretend all over again as if they had done nothing wrong. Sheila admits that she has learnt a lesson from inspector Goole about being kinder to people. Therefore her character changes from being self indulgent and arrogant to being considerate and kind hearted. ...read more.