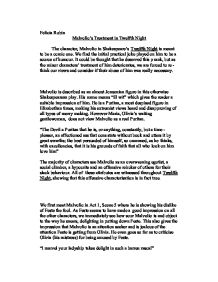 Felicia Rubin Malvolio's Treatment in Twelfth Night The character, Malvolio in Shakespeare's Twelfth Night is meant to be a comic one. We find the initial practical joke played on him to be a source of humour. It could be thought that he deserved this prank, but as the minor characters' treatment of him deteriorates, we are forced to re-think our views and consider if their abuse of him was really necessary. Malvolio is described as an almost Jonsonian figure in this otherwise Shakespearean play. His name means "ill wit" which gives the reader a suitable impression of him. He is a Puritan, a most despised figure in Elizabethan times, making his extremist views heard and disapproving of all types of merry making. However Maria, Olivia's waiting gentlewoman, does not view Malvolio as a real Puritan. "The Devil a Puritan that he is, or anything, constantly, but a time-pleaser, an affectioned ass that cons state without book and utters it by great swarths; the best persuaded of himself, so crammed, as he thinks, with excellencies, that it is his grounds of faith that all who look on him love him" The majority of characters see Malvolio as an overweening egotist, a social climber, a hypocrite and an offensive rebuker of others for their slack behaviour. All of these attributes are witnessed throughout Twelfth Night, showing that this offensive characterisation is in fact true. ...read more.

Malvolio's self love is apparent in Act 2, scene 5:even before he has found the forged letter, he is fantasising about being married to Olivia and the social power this will bring him. Malvolio is simply in love with the idea of being in love with Olivia. He wants to be above the other servants and able to reprimand Sir Toby. "Saying, Cousin Toby, my fortunes having cast me on your niece give me this prerogative of speech..." Malvolio is desperate for revenge after the humiliation that has been forced on him because of his social class. He knows that in his present situation this will never be achieved. He does not realise that while he is fantasising about putting down Sir Toby and Sir Andrew, they are, along with Fabian (another person who wants revenge on Malvolio), at that exact moment hiding in the box tree and listening to every word he is saying about them. This does not encourage them to be lenient with Malvolio. After witnessing Malvolio's egoistic fantasies, we can see why he is so easily duped by Maria's letter. Ironically the man who once put down the clown (Feste) is now becoming the clown himself as he reads out coarse puns: "These be her very C's, her U's and her T's; and thus makes her great P's." ...read more.

Malvolio tells him how he has been used. "They have propertied me; keep me in darkness, send ministers to me-asses!-and do all they can to face me out of my wits." Perhaps Feste now feels sorry for Malvolio as he hears how Malvolio still believes in Olivia's love. He agrees to help Malvolio by being a go- between, between him and Olivia and gives Malvolio the means to write her a letter. Later in the play he delivers it to her in person. Olivia finally discovers the trick that has been played on Malvolio in Act 5, Scene 1. After sending for Malvolio to help solve a problem she remembers that "he's much distract", and enquires how he is. Feste is then prompted to read the letter from Malvolio, and after he tries to make a joke of this serious situation, it is finally read aloud by Fabian. Olivia realises that Malvolio is not mad and has just been mistreated. When brought before Olivia, Malvolio is sure that it is Olivia who has done him wrong. Olivia deciphers the letter and knows immediately that it is Maria's handwriting. She feels sorry for Malvolio. "Alas, poor fool! How have they baffled thee!" This prompts Fabian and Feste to confess to their involvement in the plot against Malvolio. Malvolio, seeing how many people really despise him is hurt and angry. He storms off the stage shouting: "I'll be revenged on the whole pack of you!" Even Olivia agrees that Malvolio has been most notoriously abused! ...read more.