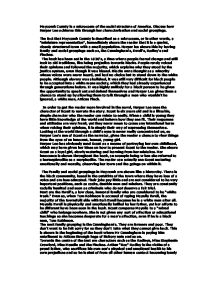 Maycomb County is a microcosm of the social structure of America. Discuss how Harper Lee achieves this through her characterisation and social groupings. The fact that Maycomb County is described as a microcosm, or in other words, a "miniature representation", immediately shows the reader that it is a quaint, closely structured town with a small population. Harper lee shows this by having family and social groupings such as, the Cunningham's, Ewell's, Radley's and Finches. The book has been set in the 1930's, a time where people feared change and still took to old traditions, like being prejudice towards blacks. People rarely voiced their opinions and followed the majority, which explains why they stood by the justice system, even though it was biased. Blacks were thought as a minority whose voices were never heard, and had no choice but to stand down to the white people. ...read more.

Looking at the world through a child's eyes is never really concentrated on, so Harper Lee's use of Scout as the narrator, gives the reader a chance to view things from the eyes of an innocent, honest, young girl. Harper Lee has obviously used Scout as a means of portraying her own childhood, which may have given her ideas on how to present Scout to the reader. She shows Scout as a loyal girl, slowly maturing and learning from her mistakes. Her innocence is shown throughout the book, an example being when she referred to a hermaphrodite as a morphodite. The reader can actually see Scout maturing emotionally and morally, observing her town and the goings on within it. The Family and social groupings in Maycomb are shown like a hierarchy. There is the black community, based in the outskirts of the town where they have less of a voice and are less educated. ...read more.

They are farmers and poor. They don't want to be felt sorry for so they don't take what they cannot give back. This is shown in the beginning of the book where Mr Cunningham is paying him entailment to Atticus through bags of hickory nuts and so on. Towards the centre of the text are characters such as the Radleys, Miss Stephanie Crawford, Miss Maudie and the Finches. Arthur "Boo" Radley is the victim of a proud father, who sacrifices his own son's physical and emotional health to his own prejudices and so he is shut of from all other human contact becoming lonely and remaining as a child in his isolation. Although he does try and attempt to make contact with the Finch children that is quickly cut off by his older brother Nathan. The Finches are a good respectable family. They are well educated and have a very good, well known background. Harper Lee portrays Atticus to be a truly civilised man and a gentleman at that. ...read more.