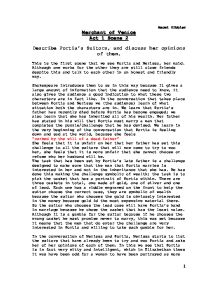 Merchant of Venice Act 1 Scene 2 - Describe Portia's Suitors, and discuss her opinions of them.

Naomi Kibbler Merchant of Venice Act 1 Scene 2 Describe Portia's Suitors, and discuss her opinions of them. This is the first scene that we see Portia and Nerissa, her maid. Although one works for the other they are still close friends despite this and talk to each other in an honest and friendly way. Shakespeare introduces them to us in this way because it gives a large amount of information that the audience need to know, it also gives the audience a good indication to what these two characters are in fact like. In the conversation that takes place between Portia and Nerissa we (the audience) learn of what situation both the characters are in. We learn that Portia's father has recently died before Portia has become engaged; we also learn that she has inherited all of his wealth. Her father has stated in his will that Portia must marry a man that completes the puzzle/challenge that he has devised. We learn in the very beginning of the conversation that Portia is feeling down and sad at the world, because she feels "curbed by the will of a dead father" She feels that it is unfair on her that her father has set this challenge to all the suitors that will now come to try to woo her, she feels that it is more unfair that she cannot choose or refuse who her husband will be. ...read more.

Portia is making a strong statement here; she is saying that she would rather be married to a skull or a dead man than to one of these princes. She then asks God to defend her from them; we learn here she is religious and that she is asking God to make them pick the wrong casket so that she doesn't have to marry either of them. The third suitor is the French Lord, Monsieur Le Bon. The Elizabethan audience will have had known what the stereotypical French man was like, and again they will have enjoyed to have seen this character live up to that stereotype. They would have believed (we still believe in the same stereotype today) that the French where fussy, that they picked at every single thing whether it food or a political system, they will have also believed that the French are arrogant, believing that they are above every one else in every single aspect. Portia comments on his arrogance by saying, "Why he had a better horse than the Neapolitan's..." By this she means that he boasted about his horse, saying that it was better than the Neapolitan's, she also goes on to comment on his personality by saying, "better bad habit of frowning than the count Palatine" So the French prince despite being rich is miserable with life and the world in general. She doesn't like his personality at all and thinks that he is moody, and that these moods can swing from to the other ...read more.

From what she says we can tell that she really does not like him, so much so that she plans to (if he does decide to choose the casket) put a glass of wine on the wrong casket so that "If the devil be within, and temptation without, I know that he will choose it" By this she means that he would be tempted to the casket that is not the right one and so she would not have to marry him, for she would rather cheat her dead fathers will than be "married to a sponge." Nerrisa informs Portia that all of these suitors have left without choosing any of the caskets. Nerrissa also reminds Portia of a young Venetian man that came to visit when he father was alive, called Bassanio, Portia does remember him and becomes quite exited at the memory, at which point she says, "I remember him well, and I remember him worthy of thy praise." A servant enters the room towards the end of the scene and informs Portia that the four suitors are taking their leave and wish to bid farewell to her. He also brings news that a fifth is arriving, a prince of Morocco. Portia comments saying, "If he have the condition of a saint, and the complexion of a devil, I had rather he should shrive me than wive me." Which is a truly racist comment, which shows that she is no better than male characters in the play. 1 ...read more.