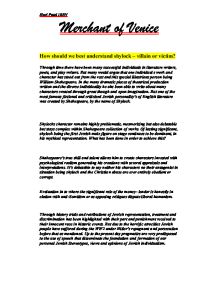 Merchant of Venice How should we best understand shylock - villain or victim?

Merchant of Venice How should we best understand shylock - villain or victim? Through time there have been many successful individuals in literature writers, poets, and play writers. But many would argue that one individuals work and character has stood out from the rest and this special illustrious person being William Shakespeare. In the many dramatic pieces of theatrical production written and the diverse individuality he ahs been able to write about many characters created through great though and open imagination. But one of the most famous fictional and criticised Jewish personality's of English literature was created by Shakespeare, by the name of Shylock. Shylocks character remains highly problematic, mesmerizing but also debatable but stays complex within Shakespeare collection of works. Of lasting significant, shylock being the first Jewish male figure on stage continues to be dominant, in his mythical representation. What has been done in order to achieve this? Shakespeare's true skill and talent allows him to create characters invested with psychological realism generating his creations with several appraisals and interpretations. It's debatable to say neither his characters no their antagonist in situation being shylock and the Christian abuse are ever entirely obedient or corrupt. Evaluation in to where the significant role of the money- lender is honestly in elation with anti-Semitism or as opposing critiques dispute liberal humanism. ...read more.

This may sound hypocritical to even think for a moment he wants to bind and create friendship but he defiantly won't be constantly rejected because of his identity. Our personality is a reflection of the soundings we are from and the people we are around. And Shylock merges into this idea as he was firstly a victim of abused and discrimination, it is only after what Shylock experienced through the punishment of the Christians upon his innocent soul that converted him into the unforgiving individual he'd become, an antagonist. As Jessica, Shylocks "beloved" daughter departed with a large part of his wealth in addition with Lorenzo a Christian, this left him in a difficult situation. As at the time he didn't know why she would do such a thing if she loved him; he was constantly analysing himself as a father what did he do wrong for something like this to happen. But on the other hand his situation left him with the mind of that of a monster. A vindictive father who wants his daughter dead, his hatred of Antonio is partly a smouldering and justified resentment for years of persecution, and partly a piece of unscrupulous greed. Shylock is regularly subjected to a vile abuse for no other apparent reason than that he is a Jew. But the Christians make no allowance for the effect on Shylock of Jessica's loss- in fact they would never accept the idea hat he might have normal fatherly feelings. ...read more.

Shylock does not receive a fair tail as there is a lot of prejudice involvement from the jury towards him before, during and after due to anti-Semitic feeling. Shylock is to blame as well due to the fact that he did not accept the money and went for the one pound of Antonio's Christian flesh. This showing us how resentful he has become, seeing that he wants the Christians to feel twice as much pain he has received from them. Shylock must have known before hand that he stood very little chance of winning the case, for the reason being of his social status. But he also gets a punishment due to his religious beliefs. Shylock should not suffer the punishment as he is not even on trial. To summarise he attended the trial but left across a disrespectful, unjustified punishment for no reason at all. Nothing else in the play suggests the bare feeling of being alive and human as the anti-prejudice speech goes "If you prick us, do we not bleed?" When shylock changes ode in to a "villain" he appears to be bitter and full of hated, vengefulness, manipulating and menacing on his fury until he finds the right opportunity to extract his revenge in the most horrific ways, by taking a pound of flesh from Antonio. The passion and pride displayed by Shylock far exceed the emotions shown by any other character. ?? ?? ?? ?? Hari Patel 10BN ...read more.