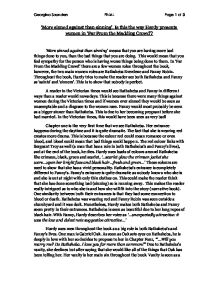 'More sinned against than sinning.' Is this the way Hardy presents women in 'Far From The Madding Crowd'?

'More sinned against than sinning'. Is this the way Hardy presents women in 'Far From the Madding Crowd'? 'More sinned against than sinning' means that you are having more bad things done to you, than the bad things that you are doing. This would mean that you feel sympathy for the person who is having worse things being done to them. In 'Far From the Madding Crowd' there are a few women roles throughout the book, however, the two main women roles are Bathsheba Everdene and Fanny Robin. Throughout the book, Hardy tries to make the reader see both Bathsheba and Fanny as 'saints' and 'sinners'. This is to show that nobody is perfect. A reader in the Victorian times would see Bathsheba and Fanny in different ways than a reader would nowadays. This is because there were many things against women during the Victorian times and if women ever sinned they would be seen as unacceptable and a disgrace to the women race. Fanny would most probably be seen as a bigger sinner than Bathsheba. This is due to her becoming pregnant before she had married. In the Victorian times, this would have been seen as very bad! ...read more.

The fact that she was betting on a Sunday was bad as this was seen as sinning. So they decided to throw their hymn book thinking that it wouldn't be seen as sinning. Unfortunately, once Boldwood received the card, he suddenly became obsessed with her, '"...My life is not my own since i have beheld you clearly...I come to make you an offer of marriage."' In 'Far From the Madding Crowd', there is one man that is a main part in both Bathsheba's and Fanny's life - Sergeant Troy. We first met Troy in chapter eleven when Fanny goes to see him outside of the barracks. A person in the Victorian Times would see Fanny Robin as a bad person if they read this chapter. This is because Hardy uses different ways to hint to the reader that she has seen Troy 'lots of times' before and she might have had sex with him. One example of this is '"Your wife Fanny"'. People would see this as sinning as they thought that it was wrong for people to have sex before marriage. However, Hardy still makes the reader see that Fanny is actually a good person, even though she had sex before marriage. ...read more.

It symbolises that everything is going to go wrong with Troy and Bathsheba's marriage (pathetic fallacy). Hardy uses many different techniques throughout the whole book to make the reader have a more vivid image of the characters (mainly Fanny Robin). One of his techniques is imagery. He uses time imagery basically all the time around Fanny to give the impression that her life is running out of time. Hardy uses the symbol of a holly bush to describe Bathsheba in chapter four, '...stunted holly bush, now laden with red berries.' This imagery gives different views of how Bathsheba is seen. It shows that she is sweet like the berries but can also hurt someone like the holly bush. It also gives the impression that she is a woman who is seen as a 'saint' as well as a 'sinner'. In 'Far From the Madding Crowd', Hardy tries to make both Bathsheba and Fanny be seen as 'saints' although the reader may see them more as 'sinners'. He also makes the men in the book be seen as 'saints' and 'sinners'. If Hardy had made them 'saints' all of the time then it would have been like a dream world and not reality. ?? ?? ?? ?? Georgina Saunders FINAL Page 1 of 3 ...read more.