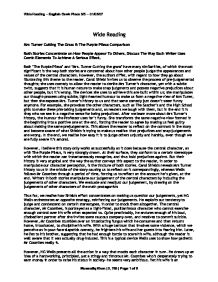 Mrs Turner Cutting The Grass &amp; The Purple Pileus Comparison - Both Stories Concentrate on How People Appear To Others. Discuss The Way Each Writer Uses Comic Elements To Achieve A Serious Effect.

Wide Reading Mrs Turner Cutting The Grass & The Purple Pileus Comparison Both Stories Concentrate on How People Appear To Others. Discuss The Way Each Writer Uses Comic Elements To Achieve A Serious Effect. Both "The Purple Pileus" and "Mrs. Turner Cutting the grass" have many similarities, of which the most significant is the way both stories are concerned about how other people judge the appearances and values of the central characters. However, the authors differ, with regard to how they go about illustrating this theme to the reader. Carol Shield invites us to observe the process of pre-judgemental thoughts; she uses comedy to allow the reader to deride Mrs Turner's character, yet with a subtle twist, suggests that it is human nature to make snap judgments and possess negative prejudices about other people, but it's wrong. The devices she uses to achieve this are built within us; she manipulates our thought-process using subtle, light-hearted humour to make us form a negative view of Mrs Tuner, but then she exposes Mrs. Turner's history to us and that same comedy just doesn't seem funny anymore. For example, she provokes the other characters, such as The Sascher's and the High School girls to make these piss-taking judgements and, as readers we laugh with them, but in the end it is they who we see in a negative sense for being prejudiced. After we learn more about Mrs Turner's history, the humour the Professor uses isn't funny. She transforms the same negative view formed in the beginning into a positive one at the end, forcing the reader to agree by making us feel guilty about making the same prejudgements. This allows the reader to reflect on the contrast in the story and become aware of what Shields is trying to make us realise- that prejudices and snap judgements are wrong. In the end, we realise how easy it is to judge others unjustly and harshly, even though we are fully aware it's amoral. ...read more.

I will now propose to compare The Purple Pileus' bearing on the same theme of prejudice and stereotypes. Indeed, Wells implements the same form of comedy, inducing judgemental views from other characters to affect our supposition. Though, there is a distinct difference in objectives: HG Wells exploits our prejudices to reinforce our stereotypical views, whereas Shields challenges our prejudices. In "The Purple Pileus" the other characters views about the protagonist, Mr Coombes, are fundamental to how we view him. His wife is, to start with, severely derogatory, referring to him as, "a little grub" and treating him with hardly any respect whatsoever. The language she uses against him reduces him to a pathetic wimp who hesitates even to respond in like terms to his overpowering wife. At the time of HG Wells, this would have seemed hilarious as society was overwhelmingly patriarchal. The opening works in an offset way to "Mrs. Turner Cutting The Grass." Instead of trying to gain a little sympathy for the central character, Wells pours scorn over Mr Coombes and mocks his role as a man and husband. Action-wise, calling him a little grub is practically the only thing his wife says to him, suggesting that she cannot be bothered to speak to him at all, "The row had arisen about that beastly Jennie again." The fact that Mr Coombes is not even consulted about Jennie and Mr Clarence coming over to dinner highlights her total lack of respect for him. She obviously doesn't feel that he is a very strong willed man and appears to think that she can walk all over him. She doesn't notice, and certainly doesn't care, that he feels extremely uncomfortable at dinner in the presence of her friends. So whilst he, "sat dumb and wrathful at his own table," she "laughed aloud" with her friends completely ignoring her husband. Jennie, the "big, noisy girl" also treats her guest without much regard or consideration. ...read more.

The men in the story do not come off very well at all; she feels smothered by her father, Kiki leaves her with a new born baby, the professor is portrayed as judgmental and exploitive of Mrs Turner and only Gord seems to truly love her, yet it is a love she appears not to share. It is also a story that is used to show that we shouldn't judge other people, that just by looking at someone you cannot necessarily tell very much about their life. It is expressed that it doesn't matter if Mrs Turner doesn't understand the difference between a Shinto shrine and a Buddhist temple as, "She's having a grand old time." Wells tries to show that people have a lot of possibility inside of them and demonstrates that it might take something extraordinary for them to realise their potential, but that they should continue to strive for this. He shows that no one need be weak and let themselves be walked all over. He obviously has no respect for people who do so. Though, I do believe Wells is looking down his nose at his characters and feels superior to them, holding prejudices about class systems (we can see Coombes is a working-class man by his accent) that are exposed in his writing. Using comic ideas, both stories effectively convey the serious implications in the writing. As I have repeatedly mentioned, they achieve opposite ideas and thus make good literature for comparison. In summarising the two authors' ideas in the stories, I prefer Shields as she has produced a more eloquent literary piece and has shown to be capable of more using more elaborate devices in order to manipulate the reader, thus making our realisation that prejudices are wrong, more significant and understandable. Whereas, Wells has composed a simpler piece of writing with an opposite theme which I disapprove of, anyway, by principle. Wide Reading - English Cswk Piece 5/5 -- 01/05/07 Mussadiq Khan | 5, 768 | Page 1 of 3 ...read more.