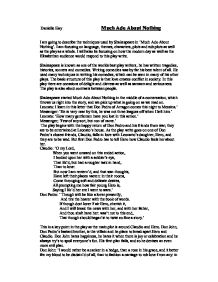 Danielle Hay Much Ado About Nothing I am going to describe the techniques used by Shakespeare in 'Much Ado About Nothing'. I am focusing on language, themes, characters, plots and sub plots as well as the play as a whole. I will also be focusing on how the modern day as well as the Elizabethan audience would respond to this play write. Shakespeare is known as one of the worlds best play writers, he has written tragedies, histories, sonnets and comedies. Writing comedies was by far his best talent of all. He used many techniques in writing his comedies, which can be seen in many of his other plays. The basic structure of this play is that love creates conflict in society. In this play there are occasions of delight and distress as well as sarcasm and seriousness. The play is also about contrasts between people. Shakespeare started Much Ado About Nothing in the middle of a conversation, which throws us right into the story, and we pick up what is going on as we read on. Leonato: I learn in this letter that Don Pedro of Arragon comes this night to Messina.' ...read more.

Shakespeare incorporated the use of lower class as comedy for less important characters in Much Ado About Nothing for entertainment. Dogberry the constable and his right hand man Verges ran around pretending they were riding horses. Don John has devised a wicked plan to tell Claudio that Hero has been unfaithful and slept with another man, he stages this in the window of Hero's quarters, and then Claudio sees this, but he does not know that it is not Hero, but another women. At the wedding Claudio says he will not marry Hero, as she is not pure. This is the main plot of the play, and the main scene. Everyone is shocked at this and Hero faints. Claudio leaves angry with his friends. Shakespeare uses this to make his audience feel a sense of loss and disappointment as further on he lifts the mood and everything falls into place. Hero' family decided to tell everyone that she has died of distress. This makes Claudio guilty and he promises to marry Loenarto's niece, who is really Hero, and he marries her then after seeing her and knowing it is Hero. Beatrice and Benedick are able to marry with the help of their friends who showed them how they really felt about each other. ...read more.

Poetry was mainly used when a character was talking or thinking to themselves. There is a use of soliloquy, when a character is speaking on his own to himself, this is usually when he is thinking alone. He cannot just think, he has to speak so the audience can know what he is thinking. Monologue is much the same thing, when one is dictating to himself. Dialog is used, when there is a conversation between two or more people such when Beatrice and Benedick are taking at the masked ball to each other. The atmosphere of the ball was a fun celebratory mood and yet Beatrice and Benedick still feel the need to trade insults with each other. Shakespeare's writing is at many a time contradicting or expressed in a way we cannot understand. But those who have an eye for Shakespeare's play who thrive on the plentiness of this play. It has it all, the plots, the happiness, love, hate and confusion. This particular play was very interesting; I was very intertrested in it and found it difficult and challenging to do this course work. You cannot compare Shakespeare's plays but you can note the style he writes in. Most his plays are written in the same style, but not all. Mid Nights Summer Dream and Romeo and Juliet and both written in the same style, with comedy and drama involved. ...read more.